Is it Ragnarok already? I’ll get the kettle on…

“Viking: Battle for what now?” you might well ask. It’s not that the idea of a Viking game is so improbable; Hell, the biggest game of last year, Skyrim, was about pseudo Vikings. It’s that Viking: Battle for Asgard has seemingly appeared from nowhere, jumped off a rainbow bridge, and landed onto Midgard (that’s Earth to you and me) without so much as a horn blow of warning.

The cynical might wonder if Battle for Asgard's timely arrival isn’t because a game about pseudo Vikings was the biggest title of last year, making now the perfect time for any Norse shenanigans. If this product seems at all familiar, it’s because it’s actually a port of a four year old console game. In those four years, fantasy Vikings have become fully lodged in public awareness. Battle for Asgard even has dragons too. Although you don’t kill them, they’re friendly. Kind of like how an F-18 can be friendly.

Along with the uniquely prodigious length between the original release and the PC version, this game further bucks usual practice for console ports with its impressive graphical overhaul. Visuals are noticeably improved over the original and take full advantage of PC hardware; antialiasing, higher resolutions, ambient occlusion, more detailed shadows and lighting all make for a title that looks perfectly at home on the longboat of current technology, rowing alongside its contemporaries.

While Battle for Asgard can confidently flex its muscles technologically, the question is really whether it’s as supple, sinewy and relevant underneath the glowy lightning and shimmery axes as its outer package would insist.

The game pits players as Skarin, a predictably burly but silent berzerker who for one reason or another is beardless. What kind of Viking doesn’t have a beard? Distrusted by his peers, presumably because he can’t or won’t grow a beard, Skarin is resurrected at the point of death by goddess Freya to lead an army in opposition of Hel, goddess of the underworld with ambitions to rule Midgard with her cannibal undead legion from Hel, the place. The goddess and the realm share the same name, so Hel must be the Asgardian equivalent of Luxembourg.

Battle for Asgard is rather light on story but at least it provides a vehicle for the villain that speaks inexplicable Norse among all the English, and remembering which other games the voice actors have been in. Oh, and Brian Blessed pops up to narrate with MAXIMUM EFFORT!

This is essentially a no nonsense hack and slash action game, except with a certain amount of nonsense. Even though it’s about slicing and combos and gory dismemberment, of which there is a lot, it takes a rather freeform approach which leads it to having a faint suggestion of an RPGish aura.

The main drive is to roam ‘zones’ which can be explored at will, freeing kinsman, chopping dead men and amassing an army. The various favours and quests all lead into unlocking huge pitched battles between armies which you take part in. When I say huge, I mean HUGE, with hundreds of warriors on either side. Battles tend to become chaotic bloodbaths, massive wars of attrition that’d be easy to endlessly slaughter within if these encounters didn’t have some loose structure that forces you to defeat a particular champion, or assassinate enemy shamans and so on.

It’s an unequivocally great idea with a good execution on the most basic level but sadly these skirmishes are on the whole underdeveloped. Despite being the general, strategic input is limited to killing supernatural tough guys and issuing targets for dragons to dive-bomb. These dragons are never actually seen up close, or interacted with otherwise, so they come across more as war machines than creatures with personality.

Maybe it’s a clever commentary that war is war, and just because it takes place thousands of years ago, doesn’t mean it has any more romance or nobility to it, but there’s no way that was intentional, and there’s something awry about dragon summoning being less about invoking a living legend and closer to calling in an airstrike.

The biggest problem faced by these skirmishes and the game at large, is the lack of variety. There are differing objectives; ‘free this group’, ‘find this rune’ but it’s all just flimsy dressing for more killing, which, alright, is the core of the game, but devoid of context, it becomes repetitive.

It certainly doesn’t help that said killing is performed with the same set of weapons throughout, although this is somewhat assuaged by the elemental runes of fire, lightning and ice that can differentiate combat. Luckily, there is a range of moves to learn during the game’s 8-10 hour length, and they’re easy to remember and perform, although the controls aren’t as fluid as they could be. Battle for Asgard is hardly Arkham Asylum, and while the controls fluctuate between serviceable and intuitive, they could certainly be improved with some fluidity.

What the combat is really begging for is some kind of roll move, with more dynamism than the static and stiff dodge features, along with one whole accompanying counter. Skarin is practically arthritic when compared to fellow white maned protagonist Geralt of Rivia from The Witcher series, who has the advantage of being able to dodge-roll around to his mutated heart’s content.

Among all the butchery is some climbing on hedges, jumping across chasms the game deems jumpable and automatic stealth, wherein Skarin is unseen. If he remains so he can perform ridiculous leaping ‘stealth’ kills that involve cleaving his foe into two separate pieces.

It seems that not only killing requires a Herculean, sorry, Thorean effort for Skarin, which might explain why mundane tasks require players to furiously mash keys in quicktime events for every little thing. It’s understandable, if unsavoury, to be drawn into the cinematic button battering that accompanies the (repeated) slaying of (the same three types of) monstrous creatures, but is it really necessary to poke a hole in the keyboard just to turn a key in a door?

Or how about the fast travel teleport system that earns quicktime events a fully ironic title? Instead of a simple button push, to even access the teleport map it’s required to stand in front of a leystone and jam the same key like a lunatic - all while Skarin’s enchanted quicktime pendant activates.

If this was a bid for immersion it achieves the opposite. It’s all too hard to not be aware of the ritual repetitive motion and finger foreshortening just to get around. The rest of the game, short of Freya’s voiceover, seems content to all but not bother with disguising its gamey nature. All too often you're forced to ‘power up this thing’ or ‘upgrade to level 2’ in a brazen way.

Even the Vikings Skarin finds tied to stakes in the wilderness seem to just be going with it, head in hands. Every single one of them is carrying a bladed weapon. The only explanation why they don’t free themselves is Viking fatalism, or a desire to meet a famous person so strong that they tied themselves to angry looking skull poles in the forest just to get rescued and have Skarin sign their helmet.

Viking: Battle for Asgard is nine worlds away from being a deep game, and despite the pretty, modernised visuals, has bountiful design features that give it away as being from that hoary old era of four years past.

Though this title is flawed, shallow, and often bland, it does have fun moments. The spectacle of the gory violence might win budding psychopaths over with its visceral charms, and some of the moves have a weighty feel to them, but the real standout feature is the crush of the pitched battles. The only real competitor in this respect is the Mount & Blade series, and the skirmishes in Battle for Asgard are generally grander and more accessible, and consequently less intricate.

For £10, it’s hardly asking a frost giant sized entry fee, but as a mindless slash fest it’s fated to not keep those pesky pillaging urges down very long. Tap F to down mead, tap F to board longboat, tap F to row away.

For £10, it’s hardly asking a frost giant sized entry fee, but as a mindless slash fest it’s fated to not keep those pesky pillaging urges down very long. Tap F to down mead, tap F to board longboat, tap F to row away.

The huge clash of armies is always impressive. 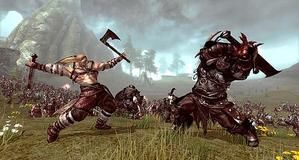