The original Warlock game was actually quite fun, all things considered. A fantasy Civ-like game, it had all of the military and political intrigue of a good 4x game, and then threw in monsters, alternate dimensions and kick-ass spell. It had its drawbacks, but as a proof of concept at least I think it did alright, which is why we’re pleased to see that Warlock 2: The Exiled was greenlit. We’ve spent the past few weeks casting our critical eye over the game, and we’re here to give you some thoughts. The verdict might surprise you.

Warlock 2: The Exiled is a bit tame, as far as ‘sequels’ go, but it makes all the right noises. The titular new game mode breaks up the game space into smaller ‘shards’ that you have to conquer one at a time, as you fight your way back to Ardania to defeat the final boss who exiled you in the first place. Along the way you’ll encounter other Great Mages, some who serve the evil one and others who were also exiled and are trying to get back to. You can either co-operate with them, or destroy them if they get in your way. This fractured network of shards, coupled with a limited city management limit, creates an interesting logistical challenge when it comes to expanding and maintaining your empire. Cities can be converted into ‘special’ cities, from free towns which you can’t control, but collect a ‘tax’, to fortress towns that don’t generate any wealth, but are useful for defending portals to other shards.

It’s not just the other Great Mages you have to worry about though – Warlock 2 brings back that wonderful feeling of a truly magical and hostile environment, with everything from giant rats to elemental guardians waiting to pound your armies into dust. Explore each shard at your peril, and know that the further you go the more muscle you’ll need to land a foothold. The first Warlock’s best feature was this idea of sending expeditions to other worlds to see what was there, and I feel the sequel as refined it slightly by spreading resources and your path to victory amongst the various shards – exploring is incentivised, so you can devote more time to it. It’s a shame this game doesn’t take notes from other recent release like Age of Wonders III, which introduces ways of expanding your reach without needing to plonk a city down (but then I wish AoW had Warlock’s variety of resources, so there you go. Swings and roundabouts, really).

As far as the actual ‘empire management’ side of things go, things are more or less the same, but with key changes in some areas. Spell research, for example, is more focused, as is choosing allegiances with a deity. There are two different spell trees you can advance up, and you need to research a certain amount of spells to reach the next level – but once you do, any spells you didn’t research are then rendered unavailable. The campaign map is still littered with resources that you can build on for special bonuses, and as always you can only build one building per ‘level’ that your city reaches, so choose wisely. Resource management is also a juggling act.

Warlock 2 isn’t all about the Exiled mode though – for fans of the original game, a ‘legacy’ mode exists which essentially allows you to play the game as it used to be, just with the new races and updated mechanics brought in for Warlock 2. It’s here that you realise how similar the two games actually are – so much so that there could be legitimate cause to take issue. The Exiled mode is so different and specifically crafted, that it does a cracking job at hiding the fact that, really, the two games are actually very similar from a mechanics stand point. Make of that what you will – there’s plenty of arguments you could raise about how we could have had the Exiled mode as a DLC or something, but other franchise like Wargame have also shown that, at some point, you have little choice but to make a new game.

The main problem I had with the original Warlock thought was the AI – it never seemed smart enough to cope in some cases. What epitomised it for me was when an AI faction was on its way to cast the Spell of Unity (the de facto ‘tech’ victory), and none of the other AI factions did anything to stop them. Being on the other side of the map, I couldn’t do anything about it either. It’s hard to tell whether things have been greatly improved for Warlock 2. The neutral enemies and beasts seem smarter now, and are a bit tougher, but sometimes the NPC faction AI can be a bit… dumb. Case and point: I’ve managed to ‘blockade’ an AI faction in its home shard before, simply by parking a unit on the portal at their end. To get through the portal, they need to get rid of my unit, but because I don’t have any other interactions with them, the AI logic can’t bring itself to hate me enough to declare war on me.

Warlock 2 is definitely a step in the right direction – it takes everything that was good about the first game, and refines it a bit, while also leaving the original experience intact. I wish they’d done more to make this seem like a proper sequel, over the “Warlock 1 done right” vibe that I get from it at times, but seeing as in this is a digital only release it’s possible their budget wasn’t amazing. It’s a shame that the Exiled mode is a bit more rigid than the legacy mode – the amount of test games I’ve done, I’d rather not have to fight the set-piece quests every single time, so a sandbox version wouldn’t go amiss. Still, this is a worthy successor, and definitely a game that can capture new gamers while keeping old fans happy. We look forward to seeing where the franchise goes from there.

Some of the new races are pretty cool. My favourites are the Svarts. 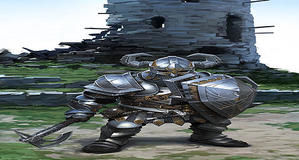