The X3: reunion is here with lots of new features and futuristic visual effects. The makers of X – Beyond the Frontier and X2 Egosoft bring you yet another space combat game X3. When you look at X3 you feel straight into a science -fiction movie. The game has stunning visual effects, which give some amazing view of the world where Julian Brenan (protagonist) belongs. Julian who is the son of Kyle Brenan from X2 who helps Julian in his extraordinary journey in a galaxy far away from planet earth. Many users who have already tried X2 will feel right at home with X3 since most parts of the game remain unchanged. Like most other games X3 has utilized the DirectX 9 Technology to produce stunning visual effects. Although the game is based in space (which is essentially empty) you will find the ships, factories and weapons to be of excellent quality.


In X3 you don’t necessarily need to follow the main plot and you can simply continue to trade with other races and build factories or just go about on your own exploring the vast universe as long as you want. The game has features of a capitalist economy. You will find that the more you trade with a particular race the more friendly they turn towards you. However if your trading effects their business they may turn hostile towards you. While trading you can constantly upgrade your ship buy many factories and build more spaceships, which is rather important since you need to be loaded with a lot of cash to keep your weapons and spaceship upgraded. Besides trading there are also many other missions at various local sectors. X3 takes places in a huge galaxy where there are a variety of activities occurring simultaneously.

In X3 amidst all this galactic space activity the player can indulge in teleportation, time-compression etc. The game has some brilliant game play scenarios in it. A player can begin at any level and decide to become an explorer or simply just rage battle with the pirates. You can even choose to be a merchant who is constantly trading with other alien races buying resources to upgrade their spaceships etc. The X3 offers free mode and 3 different occupations you can choose from, that is you can choose to become a merchant, a fighter or an explorer. The game also offers you the choice of switching from trading to combat. It offers so much free will that a new player may end up getting lost in the various complexities of the game. The 130 named sectors in the game have many different events occurring simultaneously. You may feel dizzy as so many things are happening all at once in the game. A player who has lots of free time will enjoy the overall experience of the game but someone who is a first time user may find the lack of a principle plot frustrating.


X3 scores high on the graphics and visual aspects, which are of real high quality. The impressive space scenes are hard to miss. The ships are much more sleek and smarter then the ones in X2.You will find the visual effects to be spectacular. However, most of this action is restricted to the cockpit of the space ship and this tends to be a little disappointing, as you are involved in all the action only through the driver’s seat. But it would be worth nothing here that with the highly impressive visual effects incorporated in X3 the sound effects don’t really match up and are somewhat mediocre. Infact some of the sound effects seem to be very similar to the ones in X2. Furthermore, the sound effects seem very unnatural and robotic in nature.

X3 also lacks sufficient in game tutorials, although it comes with a fat 85 odd page manual there are just a few in game pop-up tool tips which are not sufficient to get a drift of this complex game for a first time user. Also the lack of a strong story line makes it difficult to comprehend and follow all the various missions. The good news is that you can play the entire game with a lot of ease using only a keyboard and mouse. The space ships can be steered in any direction simply by using the mouse and the heavily loaded interface can be easily accessed just by moving the mouse cursor around the screen.

It looks as if Egosoft has released the X3 in a bit of a hurry leaving patches to be filled. The interface is far from being complete. The game seems to be going nowhere with its series of missions and battles. The game play must be excellent for trading but it doesn’t really seem to work for combat though. The visual effects are a definite treat allowing the player to experience an unreal galactic experience but again when it comes to sound effects X3 fails to deliver. The game has no multiplayer options, which can be a little boring, however the AI in the game seems to have a life of its own. Overall It can be said that X3 is not a bad game if you are interested in some great visual treat and some real amazing space scenarios combined with a more strategic game play involving trade than this game is surely for you, but if you are looking for something more on the lines of a single player combat game with a definite story line than you would be rather disappointed.

Scenarios where you are engaged in combat with enemies and you suddenly see one of the hostile space ships explode in a huge ball of fire lighting up the whole place is just amazing and one of the best moments in the game. 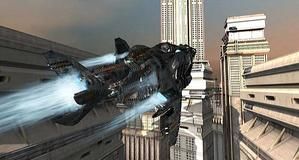