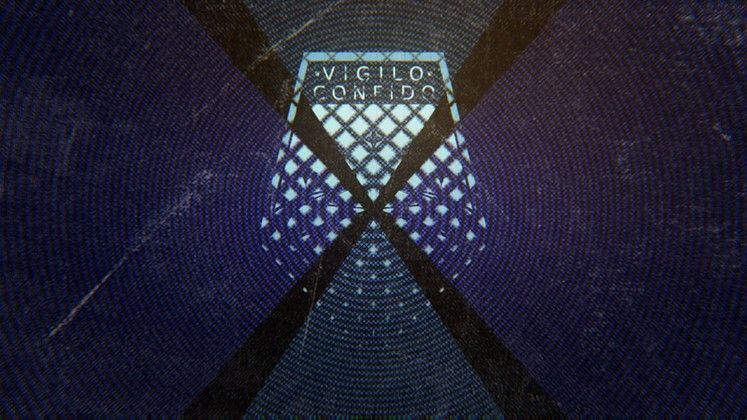 I have a lot of love for XCOM. I was never a fan of 1993’s original X-COM campy, anime-inspired setting, so when Firaxis rebooted it in 2012 with a very militaristic approach, I was hooked. After hundreds of hours spent besides an amazing cast of characters, XCOM 2 launched in 2016 with the same militaristic tone surrounded by more characters and once more with a surprisingly consistent lore, and there went another thousand hours of my life. Then Chimera Squad launched last week, and now I am slightly frightful for the future of a franchise I love so much.

While Chimera Squad carries XCOM on the title, don’t be fooled: this isn’t XCOM. You see, XCOM is more than just tactical gameplay where you move then shoot at people from behind cover – it is about humanity facing a bigger threat, uniting from across the world as the best people Earth have to offer fight to a standstill against insurmountable odds, before flipping the tables and sending the evil guys running. XCOM 1 and 2 brilliantly executed that scenario from a military perspective with a surprisingly consistent lore, letting you control an organisation and get attached to random soldiers – customised or not – who could be killed at any moment without warning. It brought the horror of war and an alien invasion to life, while also harnessing the power of hope to create an impossibly heroic experience. 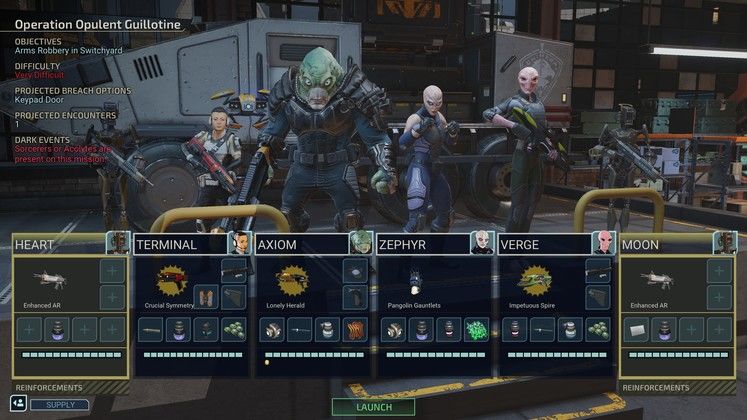 XCOM: Chimera Squad has none of that. As part of the Chimera Squad from the Reclamation Agency, you are sent to City 31 to help its police department keep up the order 5 years after the end of XCOM 2. City 31 is serving as the testbed of a new social project uniting humans with the aliens that remained on Earth after the fall of the Elders, and the presence of three criminal groups in the area is threatening the peace they are trying to achieve.

Chimera Squad retains the tactical combat from XCOM 2, minus a few alterations. Dash distances are significantly reduced, grenades are now free actions, and full cover mitigates a full point of damage – all changes brought on by the biggest change yet: interleaved turns. Unlike main XCOM games, where you move every single soldier you have in the order you wish in one of thousands of strategic combinations, CS adds a timeline restricting usage of soldiers according to their turn order. The mechanic changes the gameplay significantly, but it isn’t better or worse, merely different – interleaved turns do reduce the over reliance on a team-wide strategy and force you to react, while XCOM’s classic turn mechanic allows you much more tactical freedom and puts player choice at the forefront of the gameplay. 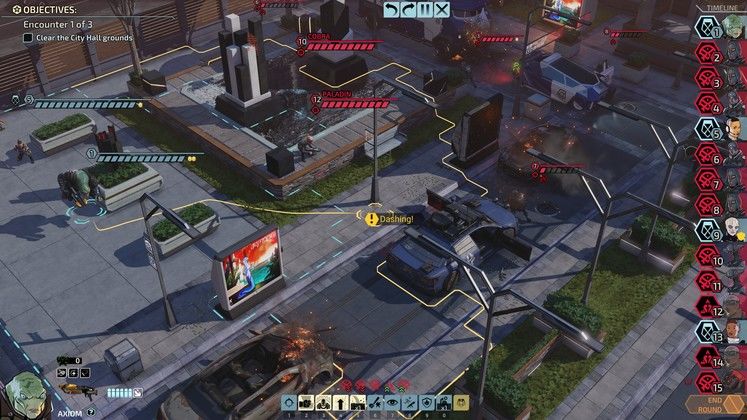 The game also features significantly smaller maps than all its predecessors, which are not procedurally generated like XCOM 2 but repeated ad nauseum like XCOM 1. The mission types are always composed of between 1 and 4 encounters, and always involve either clearing the map or rescuing a VIP/retrieving an item – the last of which requires you to evac amidst enemy reinforcements and really doesn’t gel well with the interleaved mechanics. Besides appearing every 5 minutes, these missions’ immersion-breaking dissonance doesn’t help; you often finish the mission by stealing loot and fleeing a burning building full of civilians while seemingly infinite waves of criminals storm the place from all sides – a very problematic proposal when we’re supposed to be some sort of SWAT to City 31’s police.

To compensate for the short and repetitive missions and small maps, there is a new Breach mechanic where you decide from where and in which order your soldiers will enter a room and get a free shot at the enemy. The mechanic is quite fun at the beginning, but with only three options max during a breach (attack, scramble to cover, or use one specific ability) and a surprisingly non-impactful suit of breach grenades that never change much, it quickly outstays its welcome. 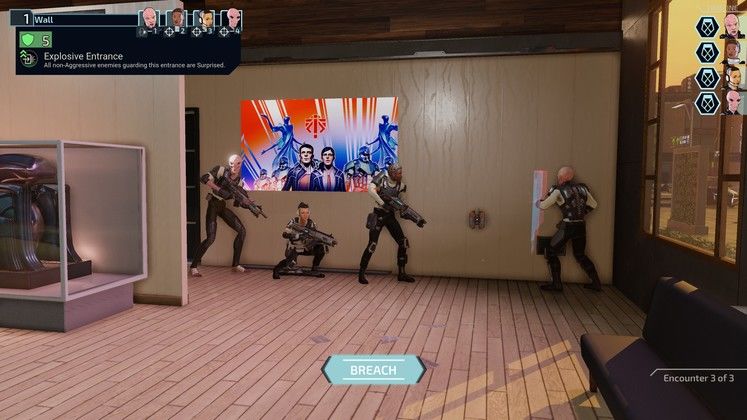 The player being forced to do between 1 and 4 breaches in every mission and the linear restrictive nature of the interleaved turns is not the only aspect of Chimera Squad that curtails player freedom – the game also refuses to let you postpone story missions in its barebones strategy layer. The hologram of City 31 divided into 9 districts serves as the strategic part of Chimera Squad, where you can order research projects, build items, and change your unit’s loadouts. The campaign progression is turn-based (as opposed to XCOM’s real-time pausable geoscape), and each day brings a couple of missions or “reports” – non-combat scenarios that still take all day and reward you with money or resources – for you to choose from. The whole game is framed by three investigations that lead to a big bad behind the Mayor’s murder depicted in the tutorial, and every mission just counts the time until the next story mission is unlocked – but unlike XCOM, you can only postpone this mission for a day or two before you are forced to undertake it.

The frustrating aspect of that is that Chimera Squad effectively prevents you from losing the game in all but the most extreme cases. While there is an unrest mechanic per district that generates Anarchy every turn and causes a game over if the Anarchy bar reaches its max, in actuality that is extremely hard to do. While XCOM allows you to postpone story critical missions at your discretion at the risk of derailing the game and losing the war, CS doesn’t want you to fail – not even when it comes to characters. 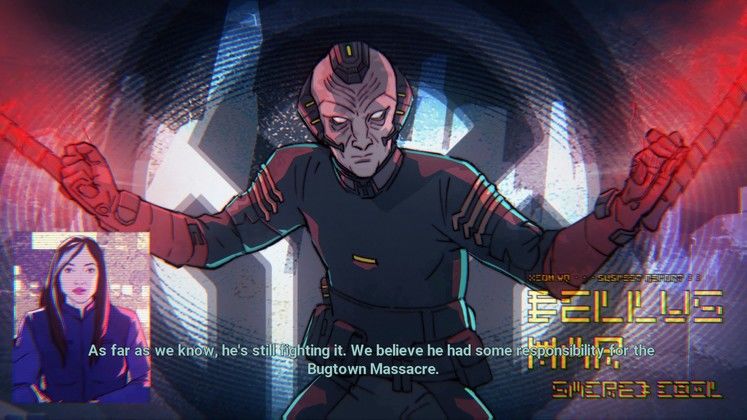 In one of the most polarising changes, all soldiers are now set characters with names, voices, and backstories, a la Overwatch. You cannot customise your character, changing their names and clothing and even ethnicity – and they can also never, ever die. Losing a character in a mission triggers a mission restart, removing any emotional punch the game could have and turning it into an extremely detached experience. The move would be justified if the characters had any development at all, but instead all they ever do is talk to each other once a day in the HQ, in the exact same way Central, or Bradford, or Lily Shen already did in the Avenger years ago – except in that case you could still have your own custom (and mortal) characters to play with.

As a result, Chimera Squad comes off as a disjointed product. Every ounce of lore crafted for XCOM 1 and 2 is thrown out the window, with alien races that fly in the face of every established story snippet and a world-building that is as shallow as it is irrelevant. The very first cutscene is 99% expository blabber, and it never gets better than that – sacrificing the military theme and the ability to lose customised soldiers in combat is not a worthy trade-off to the meagre character development and the absolute mess of a lore that Chimera Squad delivers. 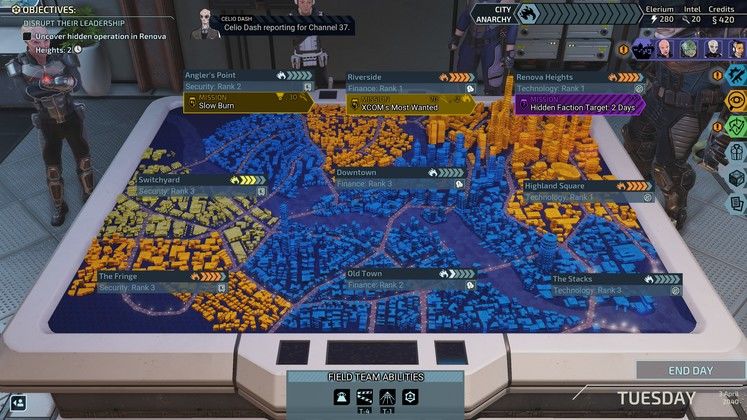 The truth is Chimera Squad is a surprisingly fun game developed in a short amount of time with a smaller budget, but the havoc it creates with XCOM’s lore and the little payout it offers is not worth it. The 20-hour story campaign is surprisingly long – which is a good thing – but the modified gameplay cannot sustain a campaign of that length. The closest I got to the ending, the more I just wished to start a new War of the Chosen campaign.

And that’s all before mentioning the bugs, which are aplenty – after the first two hours of the game, I could never get past a single mission without encountering at least one bug. Characters floated in place, armour and weapons disappeared preventing progression, cars exploded without warning despite not being in flames, medikits multiplied in my inventory, encounter numbers didn’t display properly, and reinforcements soft-locked the game every 3 missions. During my last 3 hours of the campaign alone, I had 5 crashes to the desktop – two of them while loading the 2 last encounters of the very last mission. At the moment, Chimera Squad is so unpolished that the very prospect of finishing a campaign without restarting or reloading due to a game-breaking bug requires a percentage roll. 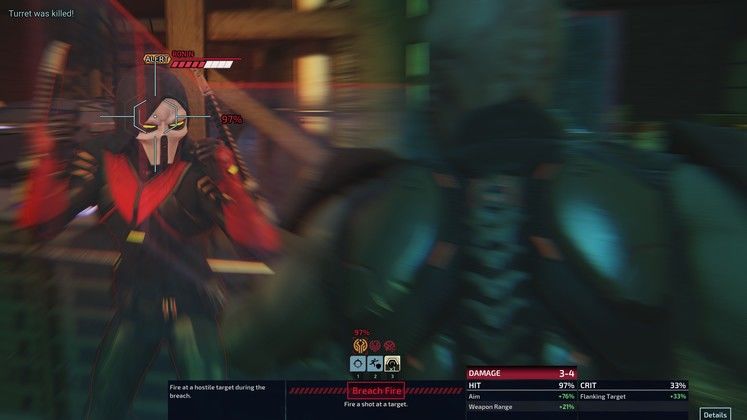 I am thankful that we got a new XCOM game, and very thankful that it is classed as a spinoff. As a fan of the franchise started in 2012, with its military tone, messages of hope and heroism in the face of a technologically superior foe and the triumph of humankind uniting against impossible odds, Chimera Squad’s lighter tone and utter disregard for lore or even common sense pains me. It’s bad enough that ballistic and plasma weapons now deal the same damage and character’s shallow interactions replace the previous focus on science and engineering and military warfare and player-created bonds – they make me worry for the future of the franchise itself. Jake Solomon – XCOM 1 and 2 (and hopefully 3)’s Creative Lead – likes to joke Chimera Squad’s team thankfully ignored half his advice when developing this game, but everything Chimera Squad does is prove how right on the ball Jake’s decisions really were.

A lore-breaking spinoff that removes most of what makes the new XCOM special and replaces it with short bouts of repetitive tactical combat and bad writing.

The first 3 hours, before the game started to wear on and crash every 40 minutes.