The Dragon of Dojima returns to PC

If you’re someone interested in the more offbeat titles that come from Japan, it’s a damn good time to get into PC gaming. We’ve seen ports of cult titles like Killer7, a push for more mature storytelling like The Missing, and visual novels that aren’t just porn. But what’s most relevant to us is Sega bringing the critically acclaimed Yakuza series to PC. Known for its brooding crime dramas and wacky sitcom antics, Yakuza toes a fine line between drama and comedy. Only in a series like it can you brutally slam a gangster’s head into a wall before playing with slot cars. Last year saw the release of Yakuza 0 to PC, and now comes Yakuza Kiwami: the first game in the franchise rebooted for the current generation. Still dramatically silly, the question that emerges is simple: can lightning strike twice?

After ten years in prison to protect his sworn brother, ex-yakuza Kazama Kiryu returns to the town of Kamurocho after ten billion yen is stolen from the Tojo Clan. With a civil war brewing in the clan after their Chairman is assassinated, Kiryu is forced to find out what happened to friends and enemies alike during his sentence. Add a mysterious child named Haruka that the Tojo Clan wants to capture (whilst Kiryu becomes her surrogate dad), and it’s going to get worse before it gets better. The most notable additions story-wise if you played the original are additional flashbacks starring Kiryu’s sworn brother Nishikiyama. They’re only small cutscenes at the end of chapters, but the perspective they give for his fall from grace is heartbreaking. 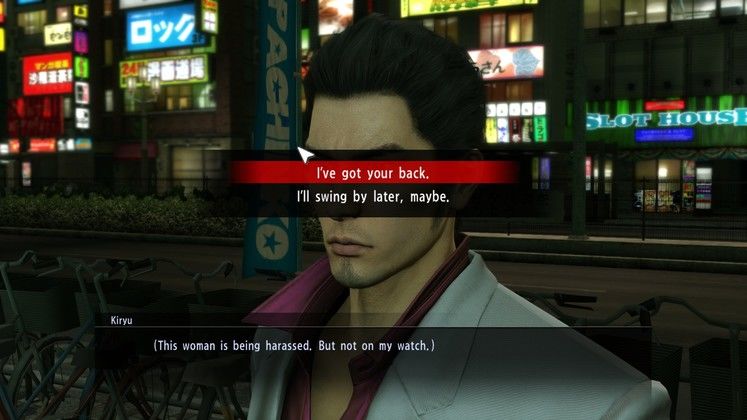 Kiwami comes with the twists and turns you would expect from the genre. Betrayal and brutality are all par for the course. The narrative might not surprise you as a retelling of a game made in 2005, but it still packs a punch. It’s not often developers remake a story like this, let alone with such confidence. There is also a surprising amount of heart throughout the story thanks to our protagonist. “Violent Father Figure who Protects Child” might be welltread ground for games (Bioshock Infinite, The Last of Us, God of War, etc.), but Kiwami reminds us that the one way to make that trope work is compassion. Kiryu is such a warm protagonist that you empathize with his plight far more than most player-controlled characters. Even if you get distracted by the abundance of side content, you’ll feel compelled to return to the story either to see what they changed if you played Yakuza 1 or what will happen next if you didn’t.

Gameplay splits between two main mechanics: Adventure and Battle. Both pretty straightforward, Adventure has you explore the world of Kamurocho to continue the story and its plentiful side content while Battle has you duking it out with the type of people you’d expect from a game named Yakuza. On the adventure side, the amount of content is wonderful if you’re a completionist and terrible if you’re a reviewer with a deadline. It’s very easy to get distracted by Kamurocho’s variety of attractions. A lot of them have been used in the previous game (such as Pocket Circuit, bowling, and darts), but there are some new ones to add to the table. The most absurd one you’ll find is Mesuking: a rock-paper-scissors game that mixes card collecting with the skimpy catfights from 0. Even if it’s done tongue-in-cheek, it’s a bit much at times.

Kiwami knows it has a lot to do and rewards you for taking part in side content thanks to the completion list. As you play, you’re granted completion points. These can be unlocked from simple tasks (like eating food) to more complex achievements (like winning with specific hands in mahjong). These points can then be exchanged for bonus items and perks. It’s not only satisfying, but it also makes you want to see everything Kamurocho offers. Other open world games make side content for its own sake, leading to repetitive or uninspired missions you’ve seen before. Kiwami makes that seem effortless for the most part, especially with the sidestories that give quests long enough to have a full arc but short enough to not waste your time. It might be shorter than 0 thanks to having one protagonist over two, but that allows for a less bloated experience if you don’t have as much time on your hands. 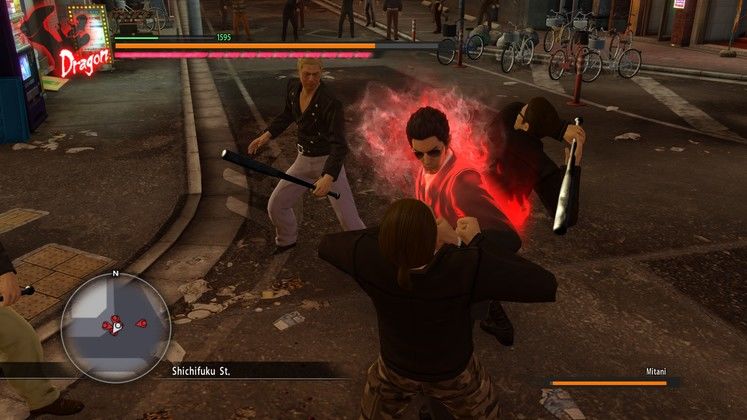 But the newest addition to the series is the very wacky Majima Everywhere. Returning after his origin story in 0, Goro “Mad Dog” Majima’s primary goal is to fight Kiryu by any means necessarily. His solution? The element of surprise. Throughout your time exploring, you might come across Majima who automatically throws down whether you’re ready or not. Random fights aren’t what make this system shine. What does is the increasingly absurdist scenarios Majima concucts. From dressing as a police officer to faking a zombie apocalypse, the game always shines when you are thrust into his plans. Not only that, but the fighting itself is tough but fair. The difficulty curve helps you learn a lot about the game’s systems and is a great way to get accustomed to the trickier battles ahead.

On the battle side of things is something a lot more straightforward: punch some guys and do some QTEs in important fights. This can be achieved with four separate fighting stances that can be swapped with the press of a button (or a double press if you want to bring out a weapon). It’s not as simple as that, but it’s got less mechanics to explore than Adventure. The big feature that makes fights in Yakuza stand out over other brawlers is the Heat Action. A context sensitive finishing move, using a heat action allows you to heavily damage an enemy if you fill your heat bar. However, heat can be lost in an instant if you’re hit hard enough, so it forces you to pay attention in fights. It’s balanced pretty well, not asking for insane combos nor button mashing. Winning battles in turn earns you experience which lets you get stronger and learn more complex moves and heat actions. It’s not the only way to earn experience (finishing substories and eating at restaurants can net some EXP too), but it’s the most efficient way during later chapters when you fight bosses.

If you played 0 first, you’ll notice that combat is a lot more balanced here. While it makes the game trickier than before, it also forces you to learn the game. It’s a lot harder to get cheap gear or to stay in a specific fighting stance. Each style has a time and place that puts them in equal footing, expanding the possibilities in fights that weren’t there in 0. The one exception is the Dragon of Dojima style, which is upgraded through special training quests and Majima Everywhere. While in theory it gives another reason to explore side content, it’s more likely you’ll forgo the style for the other three. 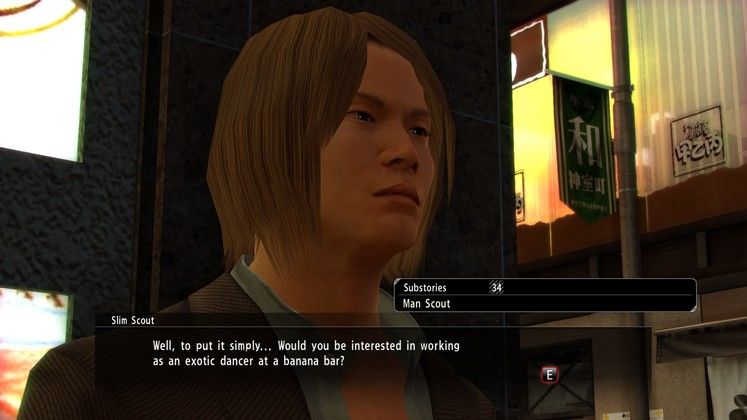 The main problem during fights is time. Bosses, especially ones near the end, have a large amount of health alongside very aggressive attacks. Add that with regenerating health (unless you get a heat action in), and some fights can be very tedious. It becomes a war of attrition rather than skill as long as you stock up on healing items. It’s not impossible, but it can dampen a worthwhile experience. 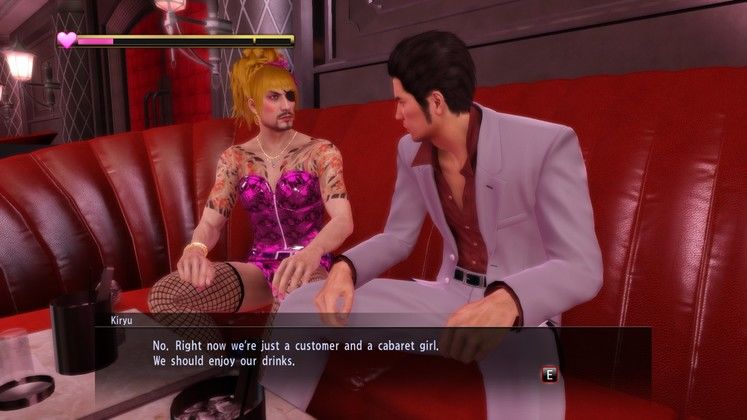 (Yes, the recommended page is like that on Steam. It’s as helpful as it looks.)

As a heretic with a gaming laptop (specifically, a MSI GL63), I understand if that voids my opinion. However, much like the previous installment, Kiwami runs wonderfully. It’s not as hardware intensive as other current releases thanks to how small the game’s map is. There might have been minor stutters at random intervals, but they were infrequent and not gamebreaking. There was a single crash, but that was more on my end than the game’s and I was unable to replicate it.

Even if it’s not as pretty as other games in the market, it is brimming with style. There is a lot of effort put into the cinematography of shots in both fights and cutscenes, which is a joy to watch. The moment that a particularly brutal punch hits, you feel it and it makes some of the more repetitive animations tolerable. The one concern that could be made is that Kiwami reuses a lot of animations from 0. It’s very noticeable and can be a dealbreaker if recycled assets bother you. That’s the only problem here. Kiwami stands out in a world where porting can spell disaster if handled improperly. If there’s anything that bothers you about this game, it won’t be how it runs.

The best way to treat Kiwami is like the 2nd season of a show. It might reuse animations or games, but the budget saved from that allows for a greater focus on the new stuff. It’s both different and comfortable. It’s not the perfect introduction to the franchise, nor the most unique. Nevertheless, if you loved the world of Yakuza 0 and crave more serious crime dramas that let you bowl with your eyepatched rival, Kiwami is a wonderful port for an interesting game. So long as you can forgive minor design hiccups, you’ll be sure to have a blast in Kamurocho.

Having a lovely time at the hostess club with Majima crossdressing, fishnets and all, before he started a fight. 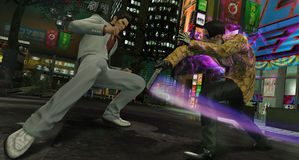