The Power of Determination, Comradery, and Shareholder Meetings 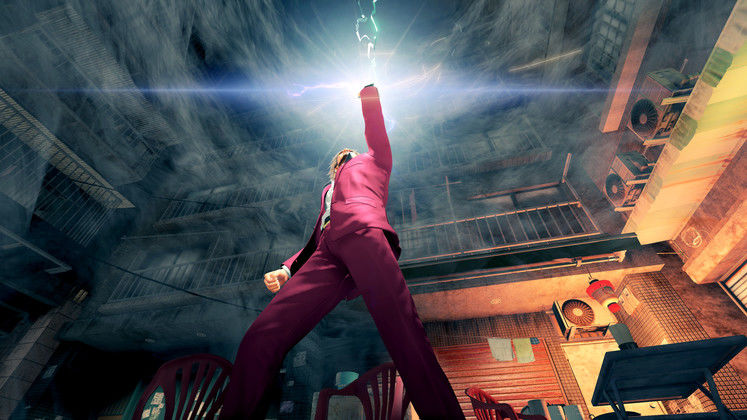 If you’ve read my previous reviews, you’ll know I have a thing for the Yakuza series. There are few franchises so willing to go to its lengths as a crime dramedy. So this year’s Yakuza release piqued my interest more than usual. For one, it’s a new protagonist bringing a new era to the series. Second, it’s now a turn-based RPG instead of a brawler like the series is known for.

This can be an odd choice, and one that might be a bit difficult to swallow for old-school Yakuza fans. However, if you give it a chance, you’ll find something both unique and comfortable in one of the most worthwhile games of the year.

A Lot Can Change in Eighteen Years...

Yakuza: Like a Dragon stars Ichiban Kasuga: a low level grunt with the Arakawa Family obsessed with being a Dragon Quest-esque hero. His boss, Masumi Arakawa, asks him to take the fall when an officer commits murder. His loyalty to the family proven, he is sent to prison for eighteen years.

Coming out of the slammer in 2019, everything has changed for Ichiban. Not only is the tech of 2019 vastly different to 2001, but the Tojo Clan as we know it is gone thanks to Masumi himself. Betrayed and gunned down, he wakes up in Yokohama saved by a homeless man. Making a party of his own, he now has a mission: to find out what has happened in those 18 years. 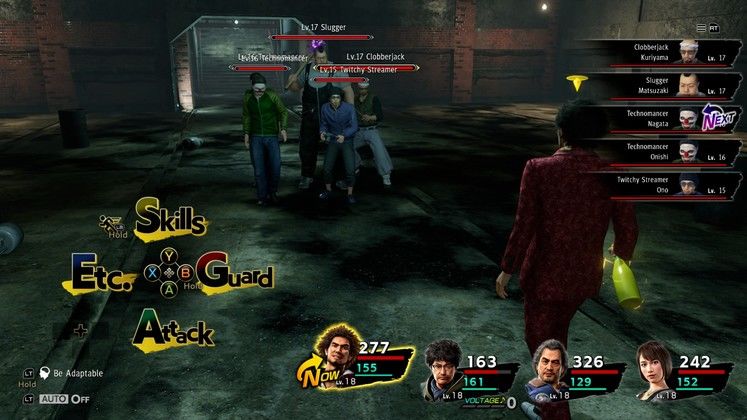 Ichiban as a protagonist is quite different from the stoic warmth of Kiryu. Instead, Ichiban is more passionate and upbeat with an honest streak. There’s a bizarre optimism from the character as he strives to be an RPG-esque hero. While it’s played for laughs, it’s hard not to be swayed by him.

He wears his heart on his sleeve, and he’s a very lovable protagonist. Anyone who’s worried about him taking Kiryu’s place has nothing to worry about. Since this also counts as a soft reboot, you also don’t need to play the previous games (though there are some callbacks). While I would always ask people to try the other games in the franchise, you can play this one first without any issues.

This is one of those games where a lot of time will be spent watching people talk. There’s a lot of cutscenes in Like a Dragon, and this isn’t as bothersome as you’d think. It’s a riveting story, simple as that. It comes with the twist and turns of a good narrative and it knows when to be funny and when to take itself seriously. This is also helped by a shocking new development: an English dub. While the Yakuza spin-off Judgement had an English dub, this is the first time in the main series (since the first game) for this to happen and the first time this option came to the PC.

Luckily, Like a Dragon’s dub is phenomenal. I’m not a fan of dubs generally, but the entire cast nails that emotional line Yakuza tows. Of particular notice is Ichiban played by Kaiji Tang. He brings a lot of charm to the role, and I can’t imagine anyone else playing him. There’s a lot of great actors in the dub. This cast includes such talented performers as Andrew Morgado, Greg Chun, Elizabeth Maxwell, and (most surprisingly) George Takei himself. But if you’re not a fan of dubs, you can switch it to Japanese if you prefer.

I Used to Wonder What Friendship Could Be... 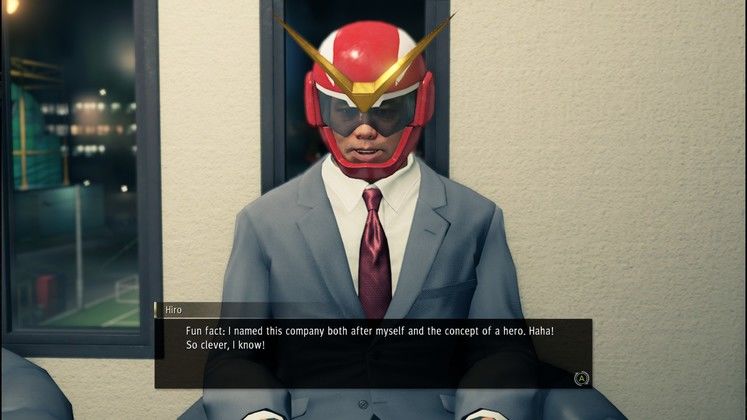 This is mostly focused on Ichiban’s new friends and they’re probably one of the best RPG protagonists in a damn long time. From the gruff ex-nurse Nanba to the hard drinking and sweet Saeko, the comradery that comes from these characters is amazing. Not only that, but that comradery plays a big part in the game itself.

Spending time with your party by eating with them, fighting alongside them, or talking about landmarks can cement your bond. Once you have a nice chat with them at the local bar after all of this, your bond gets leveled up. A higher bond gives bonuses in combat, so friendship is encouraged. That’s what makes Like a Dragon so special. Even with the brutality everyone faces, friendship is something worth striving. This is not played as a joke, even as the game gets absurd.

It rings true during the turmoil of today, that people should live by helping one another and making relationships that matter. But there can be some weird ways the game talks about its female characters at points. For instance, you can have female characters in your party take the job “Night Queen”, which is just a fancy way to say dominatrix, whilst male characters aren’t given an equivalent role. But it never turned the experience sour. It’s not, say, the mean spiritedness of GTA V. If you can forgive that, it’s well worth your time if anything I’ve written sounds up your alley.

Yakuza is a Serious Crime Drama 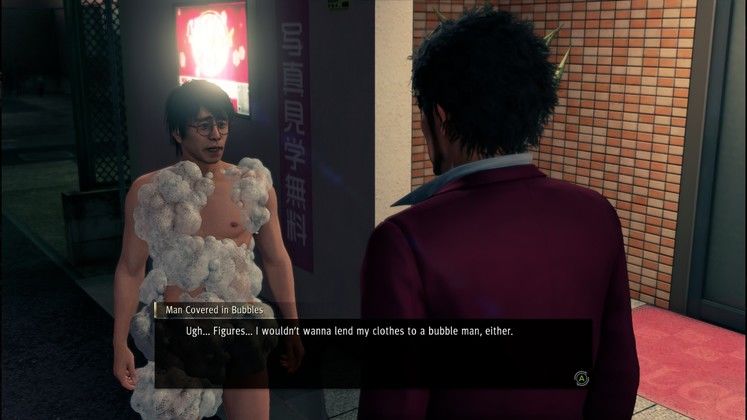 This is probably one of the wackiest games in the series and that isn’t an insult. Thanks to its RPG-bent, Like a Dragon knows the silliness inherent to its premise. It doesn’t shy away from it. However, its slow pace means that it can take awhile before the world properly opens up. When it does, it’s easy to get lost in it. If you know Yakuza, a lot of that is still there as an open world game with a LOT to do.

You have your minigames alongside your side content that’s easy to get lost in. At one point, I was supposed to find out more about how Kamurocho has changed in eighteen years. Instead, I spent a lot of time playing Virtua Fighter 5. Since the completion list comes back to this game (though it appears later in the game under the name Part-Time Hero), there’s always a reason to play around in Like a Dragon.

Some of the new minigames include the joys of go-karting, a vocational school, trying to stay awake during boring movies (you shoot down REM sheep, I’m not making this up), and business management where you grovel to shareholders. Each of these can suck up hours of your time and it’s great. The aforementioned business management can be a bit confusing at first, but it starts to make sense when you give it time. It’s not as exciting as, say, the Cabaret Club management of 0 and Kiwami 2, but it’s still pretty addicting in its own right.

Not only that, but all of this content helps you in fights. Certain choices in sidestories can level up your personality, which can then unlock new games and options. There’s a lot of synergy to the game’s design, which makes it hopelessly addicting to explore the world. If you’re somebody who cares about a game having a ton of content, you’ll get that in the new Yakuza. 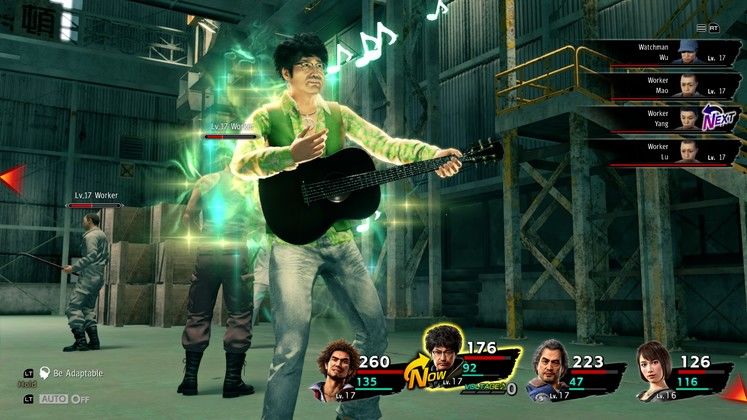 However, the noticeable part of Like a Dragon is its shift from brawler to RPG. This can feel a bit weird at first. But honestly? It works really well. Its mechanics will be familiar to anyone who loves the genre, but its extra touches add some fun spins as you face absurd enemies like soapland patrons or men hiding in garbage bags.

There is a dynamic nature to fights. Since most fights are streetside brawls, fighting is always in motion. Enemies will move around the battlefield, forcing you to change the focus of your attacks. This also means that items on the street can be used to your advantage, such as grabbing a bike next to you to bring in the smackdown. Some purists might not enjoy this, adding a greater sense of randomness to fights than a straightforward brawl. Yet, it’s still engaging as hell and there are ways to deal with extra randomness.

It also adds some additional player input, where you can guard at the right time to decrease an attack’s effectiveness or some button mashing to make an attack stronger. However, all of this action means the camera is always on the move as you take control of new party members or other enemies attacking you. This can be a bit disorienting, but nothing that caused me discomfort. It might be a surprising shift that might raise some eyebrows, but it takes a system described as boring and monotonous and gives it that Yakuza treatment. Other RPGs might use modern settings like Persona or YIIK, but this is definitely one of the best. 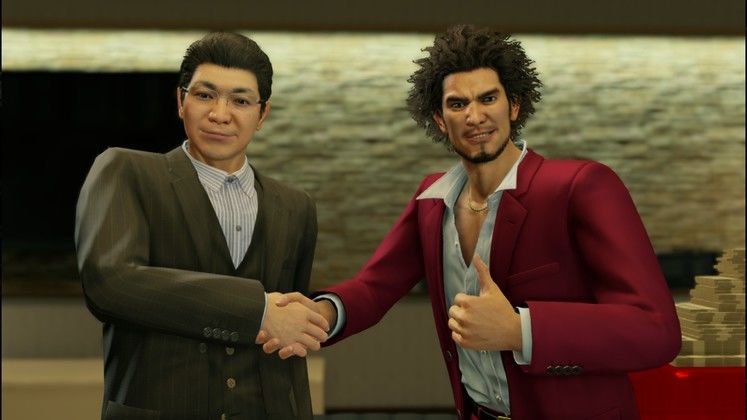 If you want to know how much I love this game, I was tempted to call my boss to say I was sick, just so I could play more. There are moments you try to be a critic, nitpicking problems and the like, but for me that contrarian outlook melted away as I played Like a Dragon. This is a game unafraid to be hopeful and silly whilst prestige titles beg gamers to take them seriously. Here, you have a game unafraid to be a game and brimming with confidence. Add that with a bunch of meaningful content, an engaging story, and some surprising warmth, and you have something close to perfect.

Yakuza: Like a Dragon reminded me why I loved video games to begin with. I cannot think of a game this year that has gripped me this tightly and didn’t let go. Here comes a game brimming with joy and excitement that is earnest with its drama and comedy. It’s the sort of game you can gush about for hours, and I will long after this review is published. Anyone who loves RPGs, open world games, comedies, crime dramas, and games PERIOD should have a lot of fun with the newest Yakuza.

There’s a sidestory called Baby Don’t Cry that made me laugh harder then I have this entire year. 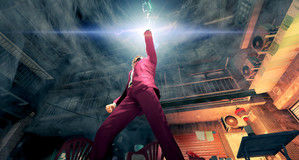