Scooped out of the 1980s and given a total overhaul, Yar’s Revenge pipes up about being Atari’s biggest selling game on the 2600 all those years ago

In 1981, a one screen (yes, one screen) shooter that had a weird concept – something about bugs and vengeance – took the gaming world by storm and made Atari a pretty penny or two. Thirty years later, for some completely insane reason, Atari have decided to resurrect their once mighty game and shoe horn it into XBLA and, if it ever comes back online, PSN.


Why? For the love of single button joysticks, why? What exactly is the point of dragging this sleeping dog out of its kennel and forcing it to learn tricks that, in its eyes, are so new they haven’t even been invented yet? Thirty years ago it sold by the bucket load. Even today, you’d be hard pushed to find an old gaming head that doesn’t have fond memories of wasting hours playing the 2600 version of Yar’s Revenge, but the similarities between that once loved cartridge and this download only game end with the title and the basic concept of shooting bugs. After that the two of them have nothing in common.

The first time I played this game I asked myself why, and I am still asking that same question a week later. I’m old enough to have drooled over the Atari 2600 when it first came out, and I’ve knelt in front of a faux wood TV, mouth agape at the imposibleness of 112 different versions Space Invaders like it was the most incredible thing in the world to be able to play more versions of a black and white game than there are weekends in a year, so I’d say I was the sort of old fart who’d be pricking their ears up at the mention of any classics remade for the modern gamer. But this remake is akin to taking Space Invaders and turning it into a 3D, on-rails shooter

And that’s exactly what has been done with Yar’s Revenge, it’s now a shoot ‘em up that drags you through 3D environments monotonously until you’re wondering loudly when will it end and why did they do it?

Or maybe it’s precisely because I am old enough to remember the sweet, unequivocal joys of the 2600 that this modernised version feels like such a flat, uninspiring dud. Or maybe the cynic in me can’t stop thinking Atari are clawing at old IP in a desperate bid to make some money. I don’t know, it seems like such a mad idea to make this game as it feels a bit like someone’s reinvented the hoop and the stick by making the stick a Wiimote and the hoop a hologram, thus making it not a hoop and not a stick.


Anyway, the Yar’s Revenge of today offers ten levels of shooting, through a number of environments, delivering an end of level boss for each one just to make them that little bit more mundane. Whereas the original version only had the one button to shoot with, this new one complicates matters considerably by giving you another six to contend with. The left stick controls your character, Yar, while the right controls your targeting as you are dragged forward into the enemy and forced to contend with avoiding bullets and shooting everything in sight to keep your multiplier on the go. It bears more than a passing resemblance to Panzer Dragoon in this way, but don’t get all excited about that comparison just yet.

There’s plenty to complain about. Let’s kick off with the difficulty settings. They’re very easy to miss, for one thing, dotted onto each level’s panel in the menu. And then there’s the wide gulf between each of them. Easy is so easy it’s practically impossible to die, while Normal seems to take a running jump away from the Easy setting, killing you off repeatedly.

Then there’s the way the story is told, via static pictures with voice-overs that sound like someone’s got an insect effect button on their Casio keyboard but couldn’t afford to replace the batteries. Which wouldn’t be so bad if the sub-titles didn’t flash across the screen so fast you only catch the first four or five words in each sentence. It’s like watching an episode of Jackanory featuring a gargling Dalek.

But such things aren’t game breakers – shoot ’em up fanatics like their difficulty settings to be on the stupidly hard side, don’t they? No, the main probem with Yar’s Revenge is that it’s boring and frustrating. It’s a steep learning curve getting to grips with the control set up, where some none too exciting power ups are stationed on the face buttons and a few different guns are placed on the shoulder buttons, and while you’re learning them the game is throwing your character around the screen, banking left and right, turning you round to deal with enemies in the rear and generally making Yar’s life hell. While this is all going on, if you’re playing on Normal, you are dying a lot. And after perhaps the fifth death the moment arrives when you wonder if you can be bothered to try again. Not because it’s so hard, switching to Easy deals with that quick sharp, but because it’s so tedious.

What kicks this game into the frustration bucket more than anything else is that control system. The targeting and the piloting being stuck onto separate sticks is really irritating. It’s a massive challenge to be able to keep effective control of both at the same time and one little slip of concentration ends up with either your reticule tucked into a corner or your character.

What kicks this game into the frustration bucket more than anything else is that control system. The targeting and the piloting being stuck onto separate sticks is really irritating. It’s a massive challenge to be able to keep effective control of both at the same time and one little slip of concentration ends up with either your reticule tucked into a corner or your character.

If you find one, let us know. 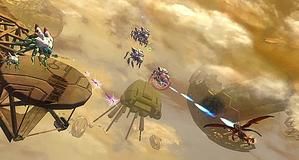