1954 Alcatraz in the latest point and click adventure from Daedalic and Irresponsible Games. It’s set in San Francisco (duh) and takes place during the 19... I'm sure you get the point. Does it face death row or does it make The Great Escape? Find out ins.

Irresponsible Games' adventure 1954 Alcatraz will be escaping confinement from its island prison March 11th for PC and Mac. Daedalic Entertainment adds it will have full English and German localisation.

We decide the fates of Joe and Christine, with Joe serving hard time for armed robbery and Christine left to deal with the mob wanting their slice of the money pie. It's set in 1950's San Francisco. 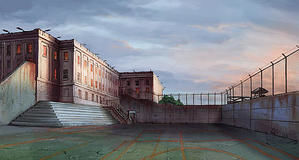