Ensemble Studios founder Bruce Shelley stated that he felt Age of Empires III was a "huge mistake", and that they deviated too far from what made the first two games classics. 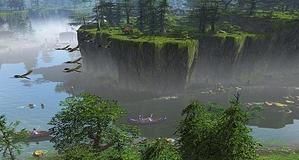