What was old is new and what’s new is great.

After successfully remastering Battlezone 98, Rebellion will be releasing Battlezone 2 Redux in 2018 with new visuals, online support, and even support for mods from the original game.

Rebellion's Battlezone VR Lead Programmer has worked in the industry for 16 years and believes that "they aren't ideal for anyone" but are still needed.

Battlezone '98 Redux was starting to feel a little barren. Having seen the release of a remaster in April of last year, it hadn't seen an update since The Red Odyssey launched in August.

Battlezone 98 Redux gets a big expansion, and it’s out today!

If you’re a fan of Battlezone 98, you probably know that there was an expansion called the Red Odyssey. It released in very limited quantities, and those few copies only made it to the US. If you never managed to check it out, publisher Rebellion has some excellent news--the Red Odyssey has been fully remastered for Battlezone 98 Redux, and it’s out today! 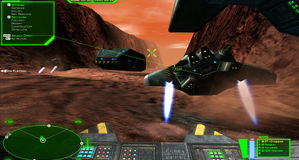