It seems like there have been hundreds of versions of Bejeweled, but does this one truly deserve its place as an official sequel?

This may or may not interest you depending on your interest in flinging different coloured jewels about - Bejeweled 3 is the latest On The House title available on Origin.

That's the whole game for free with no caveats, not the Game Time promotion where you get a certain amount of playtime which slowly runs down. 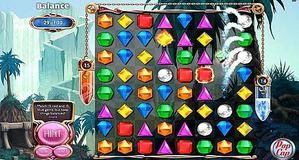