Chris Capel has been called "flaming" on more than one occasion. Now he knows why..

Mars: War Logs and Bound by Flame developer Spiders has released some new screens for their upcoming return to the Red Planet with The Technomancer, which boasts a rich sci-fi dystopia with "unique and interesting" companions.

Spiders' fantasy RPG Bound by Flame is coming this week, and to celebrate the developers have released a new launch trailer. Expect world-class beards, lots of skeletons and a fistfight with a witch.

Bound by Flame, the new RPG developed by Spiders (the company, not the creatures), is coming May 9, and the studio has just released five new screenshots showing some of the companions you'll be adventuring with.

Spiders, the development studio behind upcoming action RPG Bound by Flame, have released a new video that sheds light on the creation of the game's musical score. 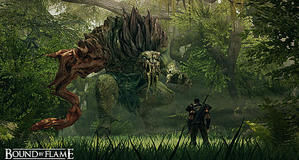