S.T.A.L.K.E.R. 2 is fairly early in development, but GSC Game World has announced that it would feature the dreaded "internet always on" DRM that has been inflicted on various games, like Assassin's Creed and Command & Conquer 4 in the past, and for the upcoming Diablo III.

The Command & Conquer team at EA have noticed their changes in C&C4: Tiberian Twilight didn't exactly go down a treat with fans, and so now ask for input.

They say the "most discussed and loved ideas" will reach the development team. Hopefully they include more traditional base building, and less gimmicky units.

EA pulled the plug on Command & Conquer: Arena which was an MMORTS title in the works, however feature elements survived and made it into C&C 4.

This makes the 6th C&C to be cancelled that we have become aware off. Arena joins Tiberian Sun 2, Renegade 2, Continuum, Tiberian Incursion and Tiberium. 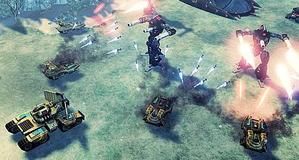