Company of Heroes could be the most revolutionary RTS to come along in awhile.

Relic is coming along to the Gamescom party, and the developer is promising to talk about "a few cool new things" they've got in the works.

Specifically it's the Company of Heroes team that will be attending. Might we be about to see another expansion pack in the same vein as Western Front Armies? 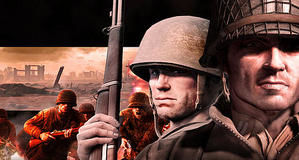