In case anybody ever thinks that Counter-Strike isn't big business, the latest viewership figures from Intel Extreme Masters tournament are here to prove them wrong.

Yep, more zombies. An open beta is on the way for free-to-play shooter Counter-Strike Nexon: Zombies later this month on Steam.

If you haven't heard about this one, it's the Western version of Korean developer Nexon's Counter-Strike Online. Basically, imagine classic Counter-Strike with a load of zombies and nuts game modes thrown in.

Alright, so the chap playing Counterstrike looks a little silly, but it does seem like he can at least keep up with the guys using traditional setups.

Gabe Newell during his presentation at LinuxCon in New Orleans has said Valve will be unveiling their plans for Linux-based hardware soon, as the studio boss cried Linux was the "future of gaming".

Next week they'll discuss their open source platform based on the OS, promising that "none of the proprietary closed platforms" will come close to their dreams.

According to Valve, the Counter-Strike: Global Offensive software development kit is being developed by Mike Durand, and will be dropping three months after the game is released. The SDK, of course, will allow players to mod the game as well as create new maps. 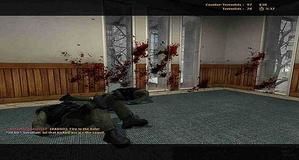