Kalypso announce DLC for DARK, new 'Cult of the Dead' mission this December

Sneaky vampire Eric Bane will be returning this December as new DLC is announced for DARK. A new mission is added that takes place after the events of the main game as Bane explores vampiric origins.

The new content has us after the Book of the Dead and we're up against a cult and its leader. Five new challenge maps are include to test our stealth skills for December 5th.

Dark shows off Eric Bane, the Sam Fisher of vampires

What if Sam Fisher were a vampire? Kalypso has released a new E3 2013 trailer for their vampire stealth action game, Dark, showing off protagonist Eric Bane's skills.

Kalypso has released a new gameplay video for their upcoming vampire stealth action game Dark. The video shows off more of the protagonist Eric Bane's possible skills and moves, and how to apply them.

The vampire secret society is exposed a little more with Kalypso's latest trailer for DARK, from developers Realmforge. It's an action-adventure title with RPG elements, divulges the official blurb.

We play as Eric Bane, a new-born vamp with a surprisingly familiar voice. It's due out for Xbox 360 and PC this Q2. We'll be picking dialogue, developing skills and drinking blood.

Jamie, why am I so tired? 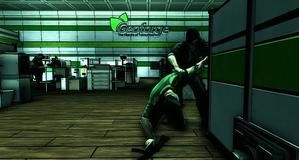