The fine fellows over at Klei Entertainment are hard at work on another expansion in the enjoyable Don't Starve series. This time, players will be exploring tropical survival in Shipwrecked. What's more, Klei will be giving fans Early Access to the game given previous success with feedback in this manner.

Not content with providing plenty of horrific ways to die on land (starvation, freezing to death, stepped on by a giant), Don't Starve developer Klei Entertainment is taking to the sea for the game's next expansion pack.

Don't Starve: Shipwrecked is coming this Fall, and marks a collaboration between Klei and Capy, creators of Superbrothers: Sword and Sworceryand Super Time Force. 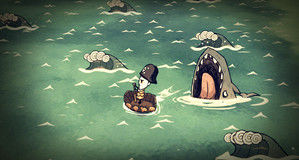