They also confirm Linux versions will launch alongside PC, and that cloud saving lets managers "pursue a single career" from anywhere. Steam Workshop integration for creators.

Sports Interactive Director Miles Jacobsen has announced that Football Manager 2013 is the best-selling game in the series, reaching back through its Championship Manager days in the 1990's.

There's also a distinct lack of piracy happening with FM13 compared to past entries, and they've seen growth in regions like Turkey. They're "significantly up" when the market has been down. 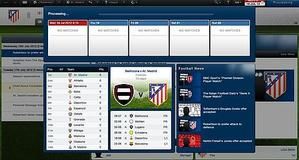