In an AMA on Reddit, a developer at Command & Conquer creators Petroglyph said that players wanted "shorter, more intense multi-player experiences" and "a lot less players are involved in the single-player campaign".

Grey Goo is free to try out on Steam this weekend

Fancy a bit of old-school RTS action? Petrolyph's sci-fi strategy game Grey Goo is free to try out on Steam over the weekend, and comes with a 60% discount during that time if you like what you play.

Our very own Chris Capel rather enjoyed Grey Goo when he reviewed it back in January, even if he felt the AI was a bit too tricky for its own good in singleplayer mode. Was he right, or do we need to make mockery of his ham-fingered RTS skills? Only one way to find out...

Grey Goo's new Emergence DLC is free for a day

In even better news, owners of the game have a day to snap up the new Emergence Campaign pack for free. The offer ends at 9am PT on June 11, at which point it will set you back $7.99.

This evening GameWatcher will be live-streaming the upcoming real-time strategy game with the greatest name ever, Petroglyph's sci-fi extravaganza Grey Goo. Tune in for robots, explosions, and aliens.

We'll be live from 8pm GMT/ 9pm CET tonight, and you can watch the stream right here. Can we make it though the game's early levels without embarrassing ourselves? There's only one way to find out...

Petroglyph’s sci-fi RTS Grey Goo will be released via Steam on January 23, the developers have announced. A new developer diary video has also been posted, explaining the intention behind releasing earlier than anticipated.

The team says that they decided to skip an extended Beta testing phase in order to "get Grey Goo into your hands and onto your computer as soon as possible." 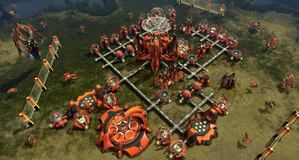