Is this really Gears of Warcraft?

Fargo: Already "quite a bit of effort" into Wasteland sequel ideas

Wasteland and Fallout co-creator Brian Fargo says there were already ideas explored for another Wasteland all that time ago, meaning if a sequel kick-started it wouldn't be "from ground zero."

Double Fine's super success with Kickstarter led to fans "pinging" Fargo about another Wasteland. He admits he "dared to get a little excited" about the prospect of reviving the IP.

Pete Hines, Bethesda's VP of marketing and PR, says they've been acquiring studios to beef up their internal capacity for videogame projects - that's the goal.

They've also been offering publishing deals with developers too. They "look to find and work with" studios that "share common" philosophy with Bethesda.

Zumba Fitness and Brink hold on to 4th and 5th respectively. Hunted: The Demon's Forge enters the UK chart 14th, while The Sims 3: Generations lands 10th.

Bethesda has released a new developer walkthrough video of Hunted: The Demon's Forge, which will be released this year for PC, Xbox 360 and PlayStation 3. 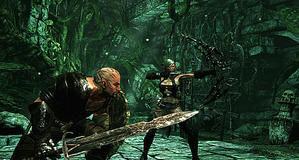