Life is Strange Episode 2: Out of Time Summary

Do you want drama? Mystery? Sci-fi? This episode's got it all.

Gamers attending New York Comic Con next week will get a chance to get some hands-on time with playable demos of various Square Enix games including Just Cause 3. The publisher will also be showing off Deus Ex: Mankind Divided at a major panel.

Season finale of Life is Strange to drop this October

Dontnod Entertainment's coming-of-age tale Life is Strange will wrap up this October 20 with the final episode, 'Polarised'. The team says that development is nearly complete and it's fairly confident about hitting that date.

"We don’t normally announce a date until we know the game is 100% ready but in the spirit of Max’s birthday (today) we wanted to let you know early that we are aiming to release Episode 5 ‘Polarized’ October 20," reads a blog post from the studio.

Life is Strange continues with Episode 4 launch next week

Stranger goings on in Life is Strange will be happening next week as Dontnod Entertainment's time-altering teen Max will be at it again with Episode 4: Dark Room. It's officially set to release Tuesday, July 28th.

The studio has been celebrating a million sale milestone for Life is Strange, which they have teased could continue albeit with different characters and setting. A new trailer has been released - spoilers!

It's the imminent release for Episode 3 of Dontnod Entertainment's hella good teenage time-bending drama Life is Strange. A launch trailer has just been posted.

Max and Chloe are playing detective at the Blackwell Academy after dark, and we've already been told that Max will discover another use for her time-altering powers.

Life is Strange returns with Episode 3 next week, May 19th

More teenage time-altering drama next week as Dontnod Entertainment's next episodic instalment of Life is Strange will be releasing. Episode 3 'Chaos Theory' will see Max and Chloe breaking into Blackwell Academy after dark.

We're teased that Max will learn some new use for her power while sleuthing. The last episode ended on a rather heavy topic, so it will be interesting to see how events play out.

Life is Strange Episode 2: Out of Time Essentials 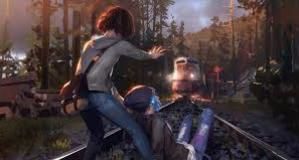