A blast from the past as John Smedley from Sony Online Entertainment reveals they've got things in motion to turn 2003's PlanetSide into a free-to-play MMO after all these years.

Right now players of PlanetSide 2 will be getting 6 months of free playtime for the original PlanetSide through a promotion, but eventually it will be adopting the F2P model entirely much like its successor.

PlanetSide 2 creative director Matt Higby stated that the original PlanetSide failed in its debut in 2003 because it was unprecedented: "When PlanetSide launched, and when we had our biggest numbers for PlanetSide, it was at a time that the world wasn't ready for it. Now we really feel that the world is ready for another MMOFPS, and we feel like we're poised to deliver a huge hit with PlanetSide 2."

Yes Planetside 2 from Sony Online Entertainment has finally been given a full official unveiling, and a bunch of in-game shots and artwork have hit.

It's a full sequel to the long-running Planetside which has three factions duking it out for control of islands. It was one of the first major MMOFPS titles.

Sony Online Entertainment's got three MMOs in the works and PlanetSide Next (a codename) is due out Q1/2 this year reveals boss John Smedley.

The Agency, a modern-day spy shooter, is still on track for "late this year," which has a "slightly smaller" team than DC Universe. Then there's Free Realms... 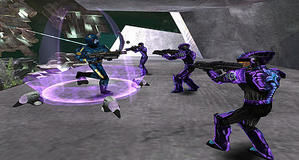