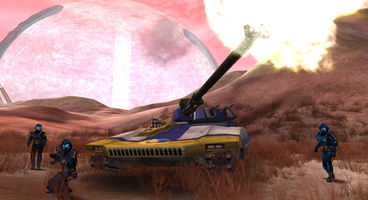 A blast from the past as John Smedley from Sony Online Entertainment reveals they've got things in motion to turn 2003's PlanetSide into a free-to-play MMO after all these years.

Right now players of PlanetSide 2 will be getting 6 months of free playtime for the original PlanetSide through a promotion, but eventually it will be adopting the F2P model entirely much like its successor.

The news came via a series of tweets from Smedley. The original game is celebrating its 10th anniversary this year, and hence why they're encouraging fans to return to it.

"We did a mass grant of anyone who has ever played PS1 or PS2 with free time in PS1," he tweeted. "We weren't ready to announce it yet because the database grant is still ongoing and won't be done till tmw morning. So please if you didn't get flagged chill. We are trying to do something cool for everyone and we were going to tell people when it's done."

"But people saw it and others broadcast the info. Please don't complain :) we aren't raising your taxes we are making a game free. This also gives us more time to make it f2p. So enjoy starting tmw late morning."

It's unclear exactly when Sony Online would be switching on the F2P model for PlanetSide as right now it seems to be just in the planning stages. Until then you could always enjoy the sequel for free.