THQ Nordic has announced that the remastered edition of Red Faction Guerrilla will be released for the PC, PlayStation 4 and Xbox One on 3rd July.

Germany's Federal Review Board for Media Harmful to Minors (Bundesprüfstelle für jugendgefährdende Medien) have removed the now 10-year-old Red Faction from their 'index'.

Nordic Games is now in charge of the Red Planet and they've been busy converting Red Faction: Guerrilla to Steamworks, which includes Achievements, leaderboards and no GFWL.

The 'Steam Edition' also includes a DirectX 11 Render Backend, stripping out the once Vista-exclusive DirectX 10. The old tried and true DX9 remains "as fall back" to those who need it.

That means full Steam Support, including multiplayer and matchmaking, Steam Achievements, voice chat options and leaderboards, as well as fully migrated save games. 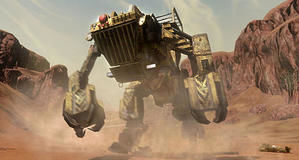