Croteam is developing Serious Sam 4, which was in-part funded by the current Humble Bundle sale, which has so far raised $181,000 USD.

A demo for Serious Sam: Double D is now available on Steam, according to a press release. The side-scrolling shoot 'em up was released earlier this year.

Croteam has announced that developer Devolver Digital's Serious Sam Double D will launch on PC on Tuesday, August 30. Double D, the first game in the Serious Sam Indie Series, will be available on all major digital distributors for $7.99.

With such enemies as "Chimputees" and "Vuvuzelators", the irreverent humor of the shooter is still there, as is the mindless hordes and carnage. 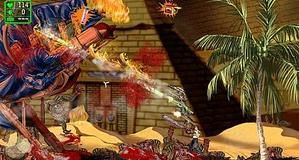