In Shelter you were a badger guiding your young cubs through the dangerous wilds, keeping them fed while also trying to stop them getting carried off by hungry eagles.

In Shelter 2 you're a lynx, but if this short gameplay teaser from Might and Delight's survival adventure is anything to go by, life in the wilderness hasn't got any easier.

In Might & Delight's Shelter 2 we play as a lynx mother looking after her young, but before that we create a bloodline that sprouts in a family tree. We'll name the cubs and may even play as them later.

An evolving bloodline just "fits the world of Shelter perfectly," says CEO Anders Westin. Each cub has a unique colour that grows more noticeable if they have cubs of their own.

Swedish developers Might and Delight have announced a sequel to their artistic adventure game Shelter. Shelter 2 will follow the life cycle of a mother lynx, and will require them to perfect their hunting and survival skills in order to provide for their cubs.

Developer Might & Delight is releasing their curious Badger den simulator next week for PC as it launches for Steam having graduated the Greenlight process. We play a mother Badger with kids to feed.

The team wanted a "strong emotional product," and they're chuffed to hear people have 'cried over Badger cubs'. Many of Shelter's creators once worked for Swedish outfit Grin.

Valve has announced 16 applicants at Steam Greenlight, fourteen of which are indie games, have been approved for Steam listing. 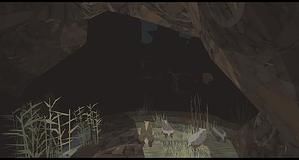