Prepare to swoon PC gamer as former Civilization series devs who formed Oxide Games are now showcasing their 64-bit game engine Nitrous, and have gone straight for the jugular with space battles.

This isn't just any battle wots in space, but a mighty conflict between hundreds upon hundreds of units. They're all calculated individually, including their weapons turrets. It's powered by AMD's Mantle.

Sins of a Solar Empire: Rebellion gets boxed retail release

Rebellion added a number of improvements to Sins of a Solar Empire, namely some huge Titan-class ships, as well as doubling factions as each split into Loyalists and Rebels.

Sins of a Solar Empire "definitely not forgotten," Ironclad have "big plans"

Just because Ironclad Games is developing Sins of a Solar Empire: Rebellion and Sins of a Dark Age, it doesn't mean the 4X space RTS will be left alone to float in the void of space operas.

The studio has "big plans" for the series but "focus right now" is solely on the expansion Rebellion and their fantasy RTS. Sins of a Solar Empire doesn't really need a campaign.

Sins of a Solar Empire developer Ironclad Games is tinkering with Sins of a Dark Age, which leaves the spacey void of sci-fi for medieval style fantasy. It's also a free-to-play strategy title.

Sins of a Solar Empire Essentials 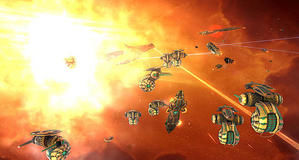