SEGA reveals over a million users registered for Spiral Knights

To celebrate the milestone a new batch of content has been rolled out for free with the Ironclaw Munitions Factory. New weapons have been added too.

Sega has announced it will be publishing Spiral Knights, a Legend of Zelda meets Diablo MMO in which players explore the ever-changing Clockworks to defeat monsters and earn loot, then do business in the Haven outpost, buying, selling, trading, and crafting better and more powerful gear. The game supports up to four player online co-op, and is developed by Three Rings, best known for the ridiculously popular and addictive Puzzle Pirates. 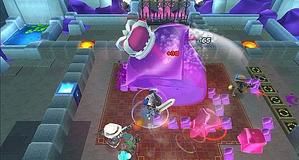