Tales of Symphonia is one of the most popular of the Tales Of series, and many gamers got it as a bonus for pre-ordering Tales of Zestiria. Unfortunately, fans are reporting that the game is a disappointingly buggy port.

Tales of Symphonia gets February 2 release date on Steam

Bandai Namco's Tales of Berseria, the 18th game in the Tales of series, was recently announced for PC, and now the 5th game of the series, Tales of Symphonia, will be coming to Steam on 2 February 2016.

Bandai Namco announces HD remake of Tales of Symphonia, coming to the PC in 2016

Bandai Namco announced earlier this month that hit JRPG Tales of Zestiria will be coming to the PC in October, and if you're a fan of the long-running Tales franchise the publisher has some more good news for you.

An HD remake of 2004's Tales of Symphonia is also planned for 2016. The game, the fifth entry in the series, was initially released on the Gamecube, and it's never been available on the PC before. 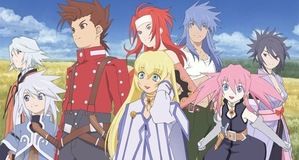