To the Moon Latest Updates

To The Moon gets second free 'minisode'

Developer Kan "Reives" Gao has released a second free 'minisode' for adventure game To The Moon, comprising another twenty minutes or so of story.

The second episode follows on from a free DLC released last year, though Gao says the new content is “a tad more. . . important, plot-wise.”

To The Moon gets new, free mini DLC episode

Fans of touching adventure game To The Moon will be excited to learn that developer Kan Gao has been beavering away on a new holiday mini-episode, and it's available now for free.

To The Moon creator announces A Bird Story

Indie developer Freebird Games has announced a spiritual successor to their critically acclaimed To The Moon RPG. They've called it A Bird Story, and it features a small boy and bird with a broken wing.

Its only link with To The Moon is that the boy grows up to be the patient Dr. Watts and Dr. Rosalene treat, otherwise it's completely separate. It's not designed around "expectations", says Kan Gao. 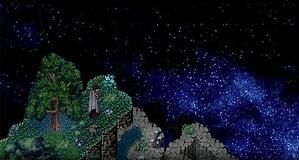