Taking a break from their ever popular Gear’s franchise, Epic Games has revisited Unreal Tournament and brought it into the current generation...

According to Epic CEO Tim Sweeney, in a few years, AAA titles will be playable in a web browser.

The CEO stated in an interview with Gamasutra, “We’re slowly heading in that direction as an industry. You should be able to take any game – a PlayStation 3 or iOS game, for example – and just go to that and play it from any web browser."

It's "nice to target the PC as a primary platform again," tease Epic

President Mike Capps of Epic Games reveals they've got five other projects in the works all at varying stages of development, and some are bound for the PC?

They "didn't multiply" the studio by five so we can "make some assumptions" on the size of these projects. Capps "can't bet" Epic every time with a videogame.

Epic Games president Mike Capps admitted Epic's former flagship Unreal series has fallen on the wayside with the company's backing of Gears of War for the past few years. 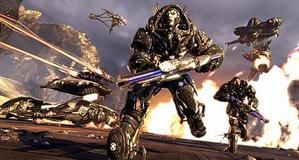