Strategy Informer: When did you decide it would be a good idea to create a Special Edition for Jade Empire?

Diarmid Clarke: We’d talked about it during production of the original Xbox version, but it was really in response to our amazing fan community that we got excited about bringing Jade Empire to the PC. Our fans had made it very clear that they wanted a new PC title, and we knew Jade Empire would be a truly incredible experience on PC.

Strategy Informer: It's said that this edition will have enhanced graphics, what sort of changes will be made to the graphics?

Diarmid Clarke: Everything about the textures and effects has been enhanced to look absolutely stunning on the PC. You’ll be getting ultra-crisp visuals with smooth frame rates, and everything loads extremely fast. And just wait til you see it on a high resolution, widescreen monitor! But we’ve also made the graphics scalable so it’ll look great and run smoothly on lower end machines as well.

Strategy Informer: What kind of new addictions will this pack bring?

Diarmid Clarke: Players will really enjoy our new fighting styles which are exclusive to the PC version. Iron Palm is a sumo-like style: it’s very slow but does devastating damage. Another new style is Viper, and that one is not very powerful, but it’s extremely fast and poisons your enemies over time.

Strategy Informer: Will you be adding any other improvements to the game?

Diarmid Clarke: Other than the high resolution graphics and stunning new visual effects, we’ve also introduced a very intuitive keyboard and mouse control system. Players can re-map the controls as they see fit, or they can use a gamepad if they prefer. We’ve also enhanced the gameplay by improving the AI, so the fights are a lot more dynamic as enemies evade, block and fight smarter. You’ll have to be a lot more strategic in your tactics and your choice of fighting styles in the PC version. In fact, we’ve even added a new difficulty level that will pose a greater challenge to even the most experienced of Jade players.

Strategy Informer: We've heard that there will be new monsters appearing, could you tell us a bit about these?

Diarmid Clarke: There will indeed be some new baddies you’ll have to watch out for, yes. One of my favorites is the Rhino Demon: he’s this big, brutish guy who will run right through you with his horn rush, or squash you with his big stomp attack. He’s pretty immune to magic so you’ll have to get in pretty close to attack him, but his long reach could easily put an end to you.

Strategy Informer: What will the system requirements be for Jade Empires?

Strategy Informer: We where informed that there will be no tools released for Jade Empires so people won't find it easy to create fan related content, we feel that fan content can bring extended life to certain games and even increase there sales. How comes this is something you don't wish to release?

Diarmid Clarke: We are big supporters of fan developed content and have worked closely with our community on several Neverwinter nights projects, on top of all the wonderful independent content that has been created. Jade uses a very different production pipeline which isn’t easily converted into tools that would provide the functionality we would want to give the fans. If we can’t do something well we would rather not do it at all.

Strategy Informer: How well is development going at the moment for Jade Empires SE?

Diarmid Clarke: The game is looking absolutely fantastic. In fact, we’re pretty much at the end of the development cycle right now, and it’s mostly just polish at this point. We’ve already shown off a couple demos of the game and so far the response has been very enthusiastic, so the finished product will be even better!

Strategy Informer: As a gamer, what's your favorite part of Jade Empires, what makes you proud to have helped create it and why is it a game RPG fans will enjoy?

Diarmid Clarke: As a gamer, and RPG fan, I love the depth and richness of the Jade Empire story and so I’m sure that other fans will do so as well. The area that I’m personally most proud of with the special edition is the gameplay changes, as they enhance the second-by-second gaming experience, and to me that can make the biggest difference of all!

Strategy Informer: After Jade Empires SE is released, what do you think will be in store for fans of Jade Empire in the future?

Diarmid Clarke: Naturally we’re very proud of Jade Empire, especially since it was our first original IP and it did very well. We’d certainly love to see it continue so who knows…?

Strategy Informer: Thanks for answering our questions! Is there anything you'd like to say to the fans of Jade Empire which are really looking forward to the release of this Special Edition pack in January 2007?

Diarmid Clarke: This new version of Jade Empire was designed with the PC in mind, and the result is an amazing PC experience that even our original Xbox fans will want to try for themselves. Our publisher 2K has also been really great at helping us achieve such a high standard of quality for Jade that our fans definitely deserve. 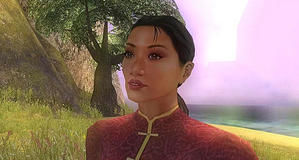