This is an ambitious mod that overhauls the entire final "Priority: Earth" portion of Mass Effect 3, fixing plot holes and adding cut content that BioWare had to abandon due to release pressure. This mod had previously been suspended due to content that Electronic Arts and Nexus Mods disallowed. The content has since been removed and replaced it with legal substitutes. This is Stage 1 of 3 planned stages. 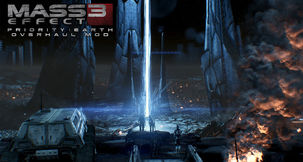