A Molyneux revisit "would probably be Syndicate or Populous"

10 October 2008 | By Simon Priest
In an interview with VideoGamer.com, Molyneux has expressed his secret yearn to bring back some creations of his past but licensing says otherwise.

He points out that the rights to video games while under Bullfrog all that time ago are "completely with EA." He would have "no qualms" of someone else handling them.

"I think it would probably be Syndicate or Populous again," he said.

Sadly, when asked if he himself could actually ever return to the games, he replied: "No. The rights are completely with EA. They're hardly going to pick up the phone and say: 'Hi Peter. Why not do these games?" They'd want to keep it for themselves I would suspect."

In a time long forgotten Molyneux ran a co-founded company called Bullfrog Productions back in 1987. Populous, the first god-game, was released in 1989 and took the PC geeks by storm.

Syndicate was released in 1993, an isometric RTS that mixed celebrated genius and the excuse for more violence which naturally was great. Bullfrog itself was bought by EA in 1995 and thus Molyneux's beloved IPs were handed over.

"Oh I'd love it. It would be fantastic. I've got no qualms of somebody else doing it. I'd just love to see it updated, the concept kept alive. It would be second best but it would still be great."

Of course Peter Molyneux has much more to celebrate these days with the greatly anticipated Fable II a mere two weeks from release. 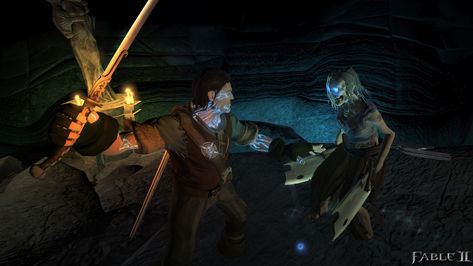