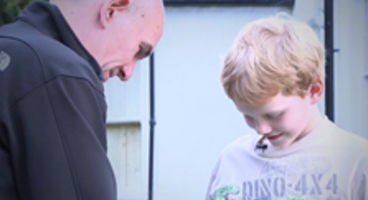 Peter Molyneux has explained how his son's video plea to Valve came about, saying his son Lucas "has this obsession" with making a video of his own.

The studio boss was at home working, filming a promotion for Fable III when his son seized an opportunity. Lucas is "always talking about" Half-Life 3.

"Lucas has this obsession with making his video," revealed Peter Molyneux. "He wants to make his own video, and it's going to involve planes crashing, people dying and the world turning sideways." Sounds like a triple-A release right there.

"Quite why the world's turning sideways I don't know. So he said, 'Oh can I record something? Can I be filmed?'" ...and thus was born the Lucas Valve plea.

"Phil tried to convince him that he didn't want to play Half-Life 3, he wanted to play Halo: Reach, but it didn't quite work." Sorry Spencer but Halo just isn't Half-Life - really the name should give it away. Nobody knows, not even Valve, when the next Half-Life is due.