Half-Life 2: Episode One is a wonderful addition to the widely-lauded Half-Life series. Just perfect game pacing and splendid atmosphere.

How, within a simple few seconds, do you get a significant player base frothing at the mouth? You get a Valve executive to teasingly point at the number '3' in an elevator, before choosing another level in the building.

Naturally this might be thought of as a Half-Life 3 trolling, but there's a real significant chance this might be for a Left 4 Dead 3 reveal. It's got an 'L', a '3' and a '4' in the clip.

Viktor Antonov played a crucial role in Valve's Half-Life 2 as it was he that concepted a lot of City 17 and the Combine architecture. Why did the art director leave Valve of all places?

Actually his explanation is quite a simple one. Valve "stopped making epic, triple-As," and turned to episodes. That just wasn't enough to satisfy Antonov, who has worked at Arkane on Dishonored. 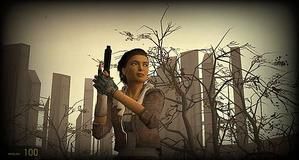