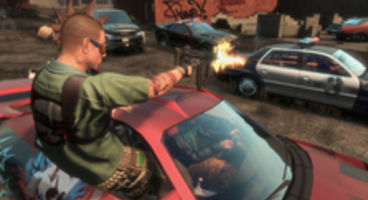 Who dares to cheat in a game about crime? Realtime Worlds has detailed some of the future changes coming to their MMO APB via the website.

Stamping out exploiters is priority one. They also reveal vehicle handling will get a tune up, increasing their response making them "less slippy".

The studio gives us an "idea of some of the areas of gameplay that we’ll be tackling over the coming weeks (by no means an exhaustive list)," reads the website.

"It's our goal to involve the community as much as is practical when tackling most of these areas - as we’ve said all along, and hopefully demonstrated throughout beta, RTW's goal is to grow APB into the game that its players want it to be," they continued.

"...so we’ll be asking for comments, posting polls and throwing ideas up for you to mull over at various points throughout the process." Cheaters, vehicle handling, combat, matchmaking, camping, missions and rulesets are all getting attention.

Changes to vehicles is a little surprising as earlier Realtime boss Dave Jones said they handled exactly the way they were meant to be driven. "You have to understand the use of the handbrake. You have to plan ahead. It's more realistic," he told Eurogamer.

"You'll still be able to power slide around corners in stylish fashion, but steering is more responsive overall and easier to get the hang of early on." Many complained there was terrific over and under steer on the cars.

Has APB enticed you into a virtual world of crime and law enforcement?