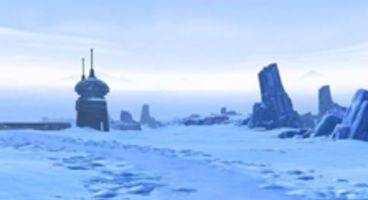 The ice world of Hoth, made famous by Star Wars: Episode V, has been added by BioWare to their upcoming MMO Star Wars: The Old Republic.

It will be a planet hotly contested by Republic and Sith forces alike, with ambitious pirates looking to salvage what they can. Screens released.

The world itself is of little strategic value with no settlement whatsoever, but Hoth becomes a major point in the galaxy thanks to a mighty battle that the Republic lost. Countless starships fell to the icy world creating a mass technology graveyard.

Pirates soon moved in hoping to salvage what advanced starships they could and build their own armada - the Republic and Sith soon committed forces again to Hoth in the hope of recovering their long lost property and so dug in for bitter skirmishes.

VideoGamer.com has exclusive concept shots of the planet Hoth from BioWare.