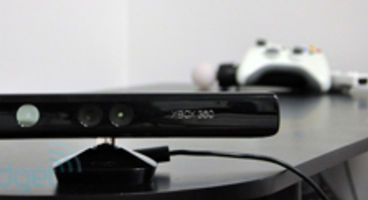 Microsoft is all smiles when it comes to creative coders developing their own open source drivers for Kinect on the PC, it was their intention apparently.

They're "very excited" that "people are so inspired" by Kinect to go the distance, especially as it took "less than a week" for people to start experimenting.

"The first thing to talk about is Kinect was not actually hacked," clarified Microsoft's Alex Kipman. "What has happened is someone wrote an open-source driver for PCs that essentially opens the USB connection, which we didn't protect by design, and reads the inputs from the sensor," he said, which they intended to promote creativity.

"Hacking would mean that someone got to our algorithms that sit on the side of the Xbox and was able to actually use them, which hasn't happened. Or it means that you put a device between the sensor and the Xbox for means of cheating, which also has not happened."

"That's what we call hacking, and that's why we have put a ton of work and effort to make sure it doesn't actually occur," explained Kipman. Right now the opens source drivers are in their very early stages as they need to understand Kinect's noise.

"The sensor again, as I talked earlier, has eyes and ears and that's a whole bunch of, you know, noise that someone needs to take and turn into signal." So these determined programmers won't get Microsoft US federal agents booting down their door? "Nope. Absolutely not," assured Kipman; they're actually quite proud.

"As an experienced creator, I'm very excited to see that people are so inspired that it was less than a week after the Kinect came out before they had started creating and thinking about what they could do," added Microsoft Games Studios' Shannon Loftis.