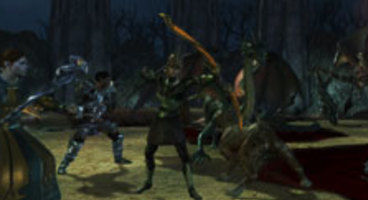 BioWare's latest DLC for Dragon Age: Origins has been revealed by the studio as Witch Hunt, which has us looking for party member Morrigan.

The hunt takes place after the events of the Origins campaign, with the team calling it the "dramatic conclusion" and it releases September 7th.

"Nearly a year has passed since the Archdemon's death, and word has reached the Wardens that Morrigan has returned to Ferelden. She has been sighted in the southern wilderness where she was first encountered," reads the official description.

"Is it truly her? If it is, then why has is she here and what secret does she carry with her? The Warden heads into the forest to find out and tie up this last loose end once and for all." Once complete it will unlock weapons useable in Origins and Awakening.

This may well be the last Dragon Age DLC coming from BioWare as the second full instalment is due March 11th, 2011 on Xbox 360, PS3 and PC. Witch Hunt releases September 7th for 560 MSP or BioWare points and $6.99 on PSN.