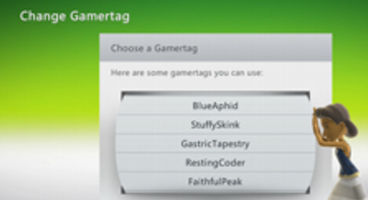 Microsoft is bringing back "previously used and unavailable" Xbox Live Gamertags reveals Major Nelson, adding that this will "take some time to complete".

For anyone who wants to try and get a Gamertag they couldn't before just keep trying in the days to come, he says. Changing Gamertag doesn't hurt achievements.

"...we have begun the process of making previously used and unavailable (dead) Xbox LIVE Gamertags available. This process will take some time to complete, and no we can’t tell you when the Gamertag you want might be available. If you are interested, you should check back regularly as we are reviving Gamertags daily," blogged Major Nelson.

"Sign into Xbox LIVE and go to the My Xbox channel, then select Change Gamertag. From here you can either choose from the random name generator, or you can enter a specific Gamertag to see if it’s available."