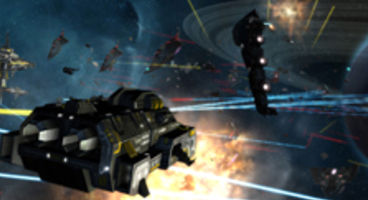 "This is the greatest time in gaming since I've been into games. I mean think about the past, let's say, 18 months. If you'd look at the releases of interesting things, it's so cool!" declared Wardell. "I mean look at Minecraft, right? Would Minecraft have been possible 5 years ago?" The most amazing times are yet to come thanks to 64-bit.

"If you think it's cool now, right now games are about to make this jump to 64-bit," he said. As most gamers aren't programmers they "don't realize the significance of that. Because we're gonna go from messing around with these 2GB limits to having essentially unlimited memory, and people don't realize what that means."

"But it means we're gonna have these crazy high resolution textures. That's what's holding us back, that's why graphics haven't got that much better in the last few years." Texture memory is the issue, it "doesn't matter how much is on your videocard, we only have two gigs to play with. Give them another year or two and we're going to see some really crazy stuff."

"I mean, even today the video cards are capable of creating essentially photorealistic real-time 3D, but they can't realistically do it because of the memory. And that's why you end up with these interesting art styles that are a little cartoony," continued the PC veteran.

"It is because the memory on the 2GB limit on Windows is holding them back. But two years from now when everyone is running 64-bit Windows 7 or what have you, that's not gonna be a problem." It's not some hocus pocus, it's just how memory is handled.

"...it's just a memory addressing thing and that's it. I don't want anyone thinking that there's some magic about it other than that you can have very very very large textures being juggled in pure RAM all the time."

"Until we get to 64-bit where the memory for these video cards will get to show their stuff, we're kind of at a standstill." Bring on the 64-bit revolution already!