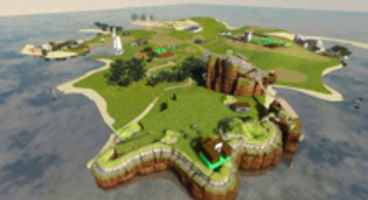 Jonathan Blow, creator of Braid, has revealed his latest game The Witness will be skipping Xbox 360 and PS3 because they're 'too old to bother with'.

Their five-year-old specs are "a lot in computer years," and it would take "such a lot of work" to port The Witness that it's "just not worth it for us."

"We like 360 and PS3, but their specifications are over five years old now, and that's a lot in computer years," said Jonathan Blow, who created XBLA megastar Braid.

"The kind of tricks we'd have to perform to get this game working on those platforms are such a lot of work that to port it over at this point is just not worth it for us."

"The budget of this game we would hope to make back through Steam and iOS, plus I would like to make a profit. But breaking even is most important as it allows me to keep making games, and I can do that without consoles," he continued.

"Maybe this time next year I'll be singing a different tune because I found out I was wrong, but I don't think so. By the time this game comes out in a year or more, we might be on an iPad 4." Blow wishes the next-gen hardware was already here.

"For this type of game, I do wish the new generation of consoles had come out by now. Even if it only meant slightly faster graphics processor and a lot more RAM. Because having more memory would make a huge difference to being able to bring a game like this to a console. It makes it much easier," he explained. What about Nintendo's Wii U?

"When you look at the Wii U, I'm told it has a lot more RAM - that would be wonderful, although I'm unsure about that platform for other reasons, especially in light of the iPad."

"If that console succeeds, it would be a nicer place to bring the game than the 360, if only because it has more RAM." All this 'choice' has also created problems for developers, argues Blow, unlike the times past when the focus was narrowed.

"The good thing about a console in the old days was that it was very focused. You knew the hardware, the controls - you can create a tight experience. That's all changed."

"The 360 dashboard is always updated, for example. If I want my game to integrate with that experience, I'm just not sure what that is now. The controller isn't standard. There's a lot more unsureness in the way you interact, which I think is a mistake," he said.

"If Kinect had been its own console, it would have been much easier. There's a fuzziness to do with what a console is anymore. But we'll see where that goes in the future."

Do you wish the next-gen cycle had begun already or are you happy to stick with the Xbox 360 and PlayStation 3 a while longer yet?