14 February 2012 | By Jonah A. Falcon
Deep Silver has announced that Jane's Advanced Strike Fighters will be landing on UK shores on the 9th March for PC, Xbox 360 and PlayStation 3. The game had been released last Fall in North America.

Jane‘s Advanced Strike Fighters has gamers flying 30 different jet fighters from the USA, Russia, Europe and China in the fictitious state of Azbaristan, which is being ravaged by a civil war. The game offers 16 missions covering 65,000 square kilometers of mountains, deserts and urban landscapes. The game also includes online multiplayer, in which four players can engage in co-op, as well as 16 player deathmatches.

The game was criticized on release in North America for being a pure arcade shooter, instead of the hardcore combat fighter sim that the original Jane's games were. 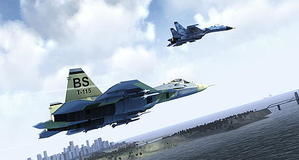