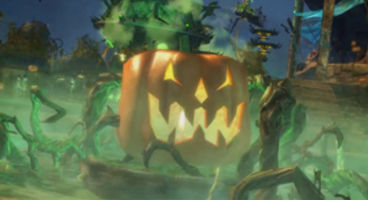 The studio also starts up premium PvP tournaments to get in on the eSports action. These new 5v5 tourneys require bought tickets at the gem store. 1st and 2nd place gets the glory and loot.

It's teased that high ranked teams from the new premium PvP could turn a profit, which would cement the MMO as a serious eSport contender.

"500 years ago, a tyrannical Krytan king was slain by his own people, those who had suffered greatly during his reign of lunacy. It is said that this king’s body was chopped into pieces, and his spirit was banished to the Underworld, but that he can return to the mortal realm for just one day a year: on Halloween," blurbs ArenaNet.

"Of course, that’s just an old folktale. Isn’t it?"

"It’s been 250 years since the last alleged sighting of Mad King Thorn’s spirit, and today, Halloween is safely celebrated by children (and merchants) all across Tyria."

"But! Strange energies are rising under the autumn moon. Is there perhaps some truth to the old stories? Do you dare to find out what’s really going on?"

The four acts begin today, October 26th, 28th and finally 31st. There are exclusive "Halloween-themed weapon skins" to be earned by opening Black Lion Chests between today and November 5th. There are loads of other spooky items available at the Gem Store, says the official website. Check out more of the event here.