01 August 2013 | By Jonah A. Falcon
As announced, the Call of Duty: Black Ops 2 downloadable content pack Vengeance is now available for PC and PlayStation 3. Vengeance adds four new, diverse multiplayer maps, as well as a Zombie map along with a new weapon. The DLC costs $14.99, and is free with the Season Pass. 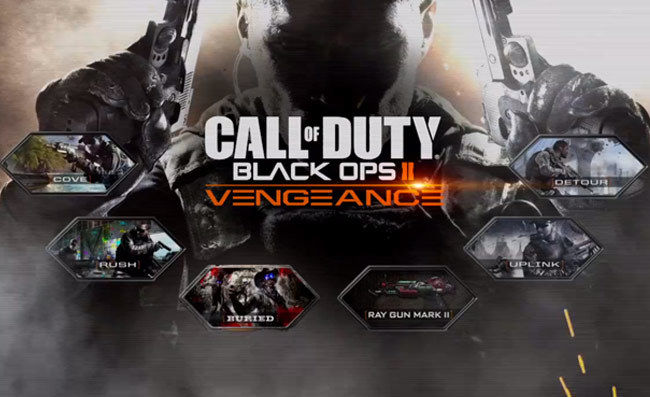 * Cove: The stage is set for all-out conflict on this small, forgotten island in the middle of the Indian Ocean, with players battling it out amongst the wreckage of a jet that crash-landed during a smuggling operation gone wrong.

* Detour: A destroyed suspension bridge, high above an East Coast waterway, packed with scattered vehicles, exposed iron and collapsed pavement where the head-to-head action will play out on multiple levels.

* Rush: Get ready for fast, close-quarters engagements in this paintball course turned full-combat arena, giving players new opportunities and challenges to use the cover to their advantage.

* Uplink: In this re-imagined adaptation of the fan-favorite multiplayer map "Summit" from the original Call of Duty: Black Ops, players clash deep in the rain-soaked jungles of Myanmar, high atop a hi-tech mountain facility.

* Buried: Once players meet up with the four survivors of Tranzit, they'll begin to encounter the undead residents of an abandoned underground Old West mining town. A healthy arsenal of equipment and weapons will be at players' disposal, but with one very special addition - something so powerful it will also appear in all other Call of Duty: Black Ops II Zombies maps (with the purchase of Vengeance DLC) - the Ray Gun Mark II.

Activision is also announcing six new Call of Duty: Black Ops 2 Personalization Packs for PC and PS3 players on the 22nd August. The packs are Glam, Coyote, Aqua, Pack-a-Punch, Breach, and Rogue, and will be available for $1.99 USD each.