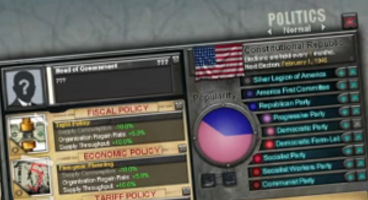 The standard Hearts of Iron III does make it difficult for those who prefer wheeling and dealing behind the political scenes, as the outbreak of global war is guaranteed.

The appeal of East vs. West is the Cold War, in which the very threat of a third and perhaps final World War was ever looming. Most of the ruckus between NATO and the Warsaw Pact was of course moving around smaller nations as pawns. This is exactly what Keresztes is talking up in our interview.

"The problem with Hearts of Iron III was that it only really had depth through combat," said Keresztes. "We didn’t want players to only have just one tool for doing things; we wanted the player to have many tools to choose from just like it was during the Cold War." Nations can be toppled through various underhand means.

"Take politics for example, you can support specific parties, with penalties, and depending on which Government-type you have you can even outlaw parties, so they can’t participate in the next election. This then can buy you time to work on the population and get them on your side."

"Or you might just want to collapse that and go into Communism, and suspend elections all together. The only way you could then get out of that is to suffer a coup, or get another nation to invade you and force your government out. So if your country drifts into either of these extremes, Communism, Fascism etc… then you can’t get them out without drastic measures. This means though that the US could go Communist, and then the next largest faction in NATO takes over."

Should all out war start exploding around the globe then the Doomsday clock will start ticking.

"But this is a dangerous gamble because you have to use diplomacy to convince your enemies to do the same; as if you just do it by yourself you make yourself vulnerable. So you have to make sure you try to influence other nations to follow your lead. At the same time, other nations will try and stop you from getting nukes in the first place." Tick tick boom.

Check out our full interview with Gellert Keresztes. East vs. West: A Hearts of Iron Game releases Q2 2013.