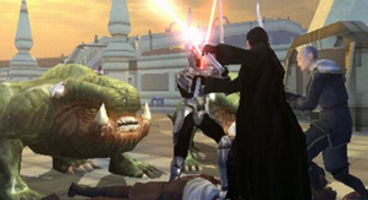 Star Wars: Knights of the Old Republic II dev Obsidian Entertainment wants to make another game in the franchise. They have in fact already pitched their idea to LucasArts, but then Disney came along.

The studio is "still hoping" something will happen even with the "Disney/Lucas stuff going on." What was their pitch? An exploration between Episode III and IV. LucasArts was 'interested'.

“I would say it’s within the top three pitches we’ve ever come up with,” Urquhart told RPS, talking of a Star Wars RPG.

"We pitched a between-Episode III and Episode IV game," he said, referring to LucasArts. "Because we think that timeframe is super interesting. It’s the fall of the Republic, the extermination of the Jedi, it’s Obi-Wan going off and making sure Luke is OK. You have the Sith, but you have the extermination of all Force users except for very, very few. So it was an interesting time to set a game, and you know, Chris Avellone came up with a really cool story.”

“We also latched onto it because it has elements people remember, but not the stories." Such a project in this timeline can completely forgo involving the movies. "It can tease them, but nothing else.”

"It’s something we’re still hoping for, even with the Disney/Lucas stuff going on,” continued Urquhart. “It changes things a lot, but you know, we’re gonna push on it. I would say it’s within the top three pitches we’ve ever come up with. We really worked on it hard and distilled it down to these eight or ten pages that really sold the story and characters."

"Then we sold it off to LucasArts and got a call back later that day. They were like, ‘This seems really cool. We want to talk to you guys, like, tomorrow about it.’” The studio hasn't talked with Disney executives yet about a new Star Wars game. "We’re kind of waiting for the smoke to clear. But that’s one of my next big things to do."

Obsidian Entertainment is very busy with their grossly funded Kickstarter for Project Eternity, an isometric RPG that received pledges to the tune of $3,986,929 from 73,986 backers.