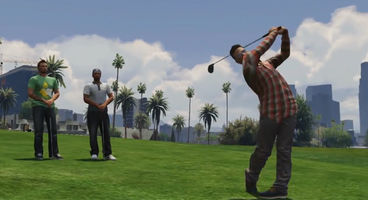 Rockstar North president Leslie Benzies has said the reason behind GTA Online's 'parent' method of character creation is because real people pop out after "a man, a woman, and some sexy time."

The studio wanted to capture some of that by making us choose parents and grandparents, "then out pops your character." We then 'sculpt' through decisions on lifestyle.

The Collector's Edition of GTA V offered an additional choice for the parenting pool; GTA IV's Niko and GTA III's Misty. We get to pick which parent the 'child' favours.

"I've always felt character creators in games to be a bit wacky - pulling the ears and noses to change the way they look seems wrong," Benzies explained to Game Informer. "That's not how humans are made in the real world. Normally it involves a man, a woman, and some sexy time."

"This is the basis of how we do it in Grand Theft Auto Online: Choose your mum, dad, and grandparents, then out pops your character." The actual attributes of our online personas are fine-tuned by lifestyle choices we make on their behalf, which ultimately shapes what they're good at doing in-game.

"You then spend time choosing your lifestyle, making choices about the kinds of things your character spends time doing, whether they spend more time partying or sitting on the couch or doing criminal activities than sleeping and being athletic - and your character is complete," he said.

GTA Online won't launch until two weeks after Grand Theft Auto V is out the door, meaning early October. The reason there's no simultaneous launch is because Rockstar want people to adjust to all the changes with GTA V in single player first, before going online with others causing a ruckus.

Grand Theft Auto V releases on Xbox 360 and PS3 September 17th. Already leaks have begun to occur with the map of Los Santos being posted online, taken from the official game guide. Rockstar is warning fans to be vigilant of spoilers and is taking a zero tolerance policy on game copies being received early.