13 June 2013 | By Simon Priest
Naval conflict just got cool as Paradox Interactive has updated all platforms for Leviathan: Warships with the 'Jazz Boatman Update', adding the "silky-smooth vocal gifts" of Jazz Boatman as a narrator.

We get a Big Red Jazz Button to push to enjoy some cool jazz music as we lead our naval forces to victory. The update also has some game balance changes to damage and function.

There are fancy visual trimmings like anti-aliasing, bloom effect and other post effects now available. The full changelog is available over at Paradox Plaza. Stay cool, daddy-o.

◾The user interface now scales to properly support high-resolution screens. This should fix the issues Nexus 10 and Mac retina displays have with a tiny GUI.

◾Ships are now re-selected after targeting orders have been placed

◾Existing player accounts might receive invalid fleet sizes on existing fleets because of this. New Accounts will not be affected by these changes.

◾Added the ability to reorder the ships in the shipyard

◾Winner/Loser status in the battle bar removed during replays. Why ruin all the excitement? 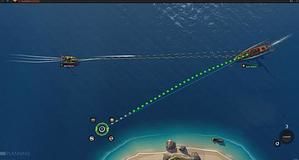